You’ve seen the low fares on Canada’s new discount airline and you’ve probably wondered what it is like to fly on a budget carrier. This Swoop Airlines review is the result of a quick trip my husband and I took with Swoop Airlines from Edmonton to Abbotsford and back. It wasn’t flawless service, but it was cheap. Read on if you want to find out what went wrong. 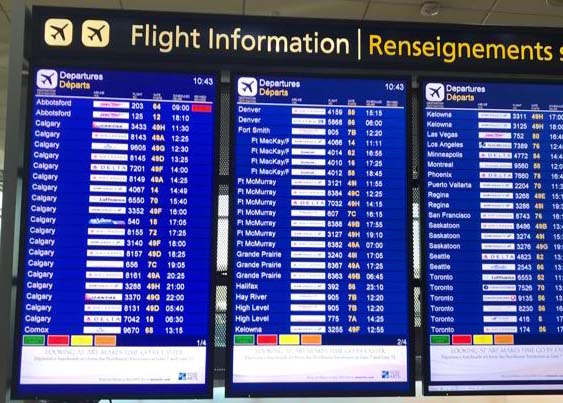 Swoop had the only delayed flight out of Edmonton International Airport. This negatively affected our travel and our Swoop Airlines review. Photo by DEBBIE OLSEN

Related: Interested in more articles about how NOT to travel? Check out our post about How Not to Get on an Aircraft.

Delays Happen – and it’s a Bummer When They Do

Conversations turned grim in the departures area at Edmonton International airport. We were delayed on our Swoop flight by nearly three hours at that point. To pass the time, fellow passengers were talking about the worst flights they had ever been on. That’s never a good sign. Apparently some guy lucked out on one of his trips. He was on a plane that crashed, but he wasn’t injured. Insurance paid him $80,000 for that one. He considered himself lucky. He used the money to buy a new truck. I was really hoping he wouldn’t be lucky like that again. I’d rather make money without the imminent risk of death thank you very much. 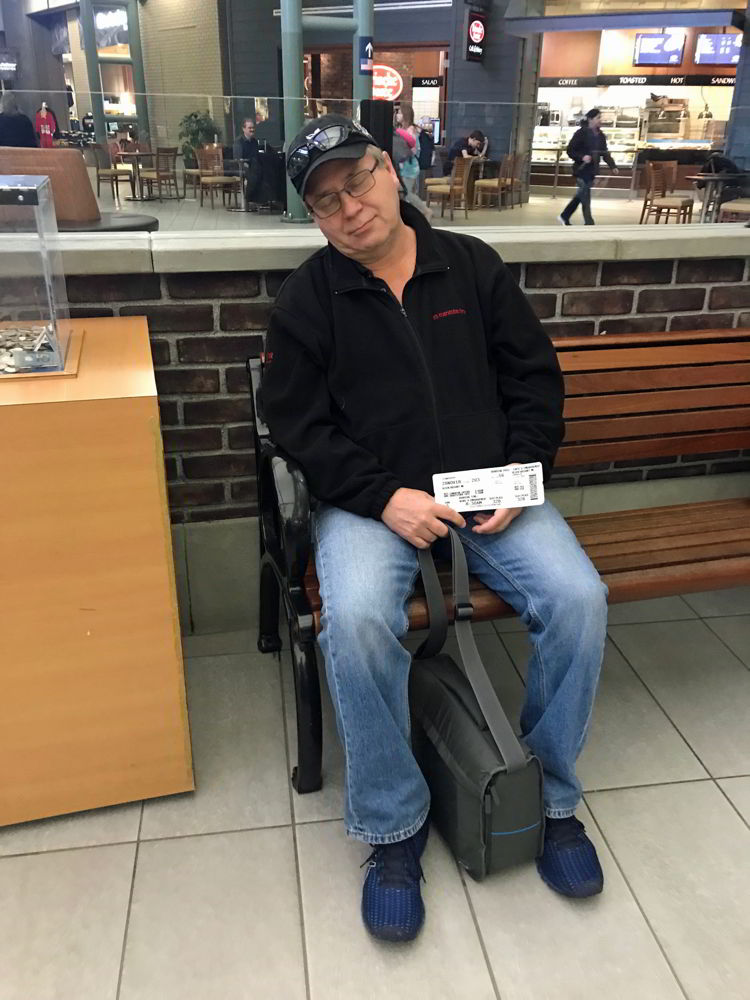 Wish Swoop would have contacted passengers to let them know about the flight delay. This definitely affected our Swoop Airlines review. We could have slept in. To make matters worse, I was randomly selected for extra screening when we went through security. Greg fell asleep. Photo by DEBBIE OLSEN

We found out about the 3-hour flight delay when we checked in for our early morning flight. Truth be told, we got up at 5:30 am to make the drive to the Edmonton airport and be there 90-minutes prior to the flight departure time. When we checked in, the Swoop Agent asked if we had received an email about the flight delay. The plane we were supposed to fly to Abbotsford on had a cracked windshield and the airline was bringing in another plane, but it wouldn’t arrive until at least three hours after the scheduled departure time. The gate agent said the airline knew about this flight delay the previous night, but never sent an email to us or any of the other passengers. I really wish they would have. I like sleep. The failure to send an email notification was my biggest frustration in this Swoop Airlines Review. 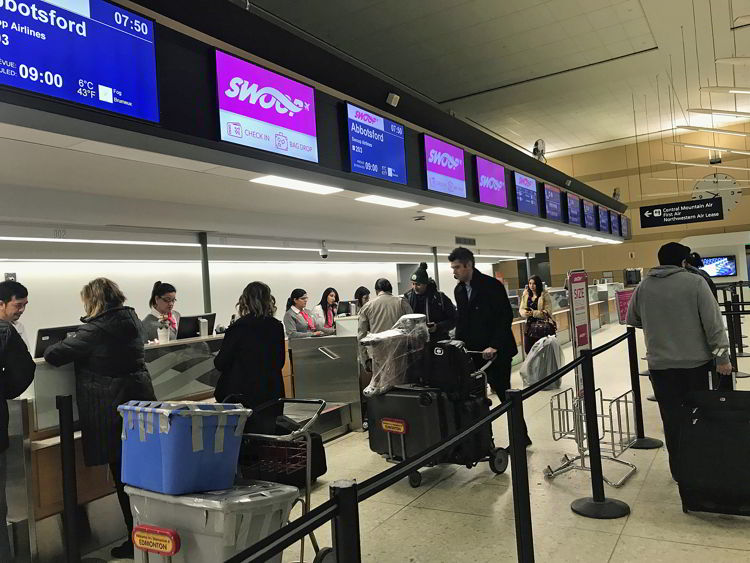 We didn’t get a smile from anyone at Swoop until we boarded the aircraft. Then again, it is hard to tell someone who got up at 530 am that their flight is delayed by three hours. Photo by DEBBIE OLSEN

What You Should Know When Booking

Swoop is a discount airline and they charge for everything – including things that come complimentary with other airlines. Each passenger can bring one small personal item for free. Checked bags and carry-on bags cost extra and it’s substantially cheaper to purchase baggage online before you get to the airport. Interestingly, carry-on bags cost more than checked bags. They serve drinks and snacks for a charge, but you won’t even get a glass of water for free, so bring a water bottle. Expect to be on hold a long time if you call the Swoop toll free number (about an hour when I tried). If you reserve over the phone, you’ll pay an additional fee. Hot Tip: Make sure you factor in the add-ons (phone booking fees, seat assignments, luggage, snacks and more) when you’re considering flying Swoop. 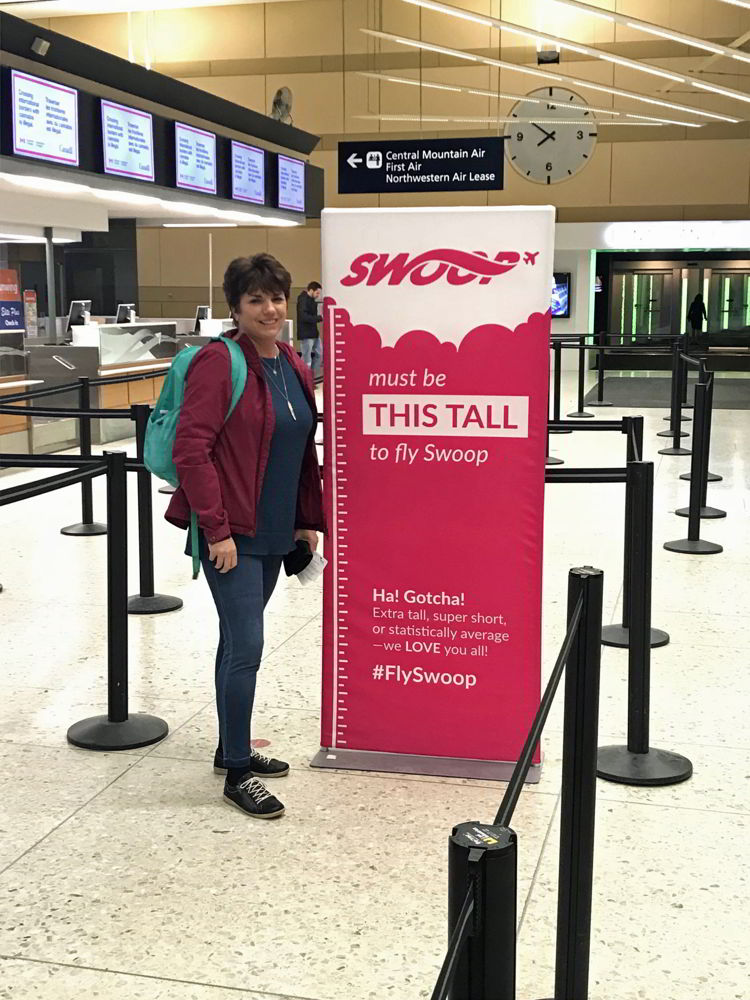 A look at the cute signage and marketing for Swoop. Photo by DEBBIE OLSEN

A Little Snag with my Online Purchase

Since it was cheaper to purchase checked baggage in advance online, I did that the night before. Unfortunately, I didn’t realize I was purchasing a checked bag for the return flight instead of the outbound flight. When I got to the airport, I was unable to purchase a bag online for the outbound flight and it took the check-in agents some time to be able to sort out the issue. They were on hold for a long time when they tried to call the airline. I guess there’s no discrimination when it comes to hold times. 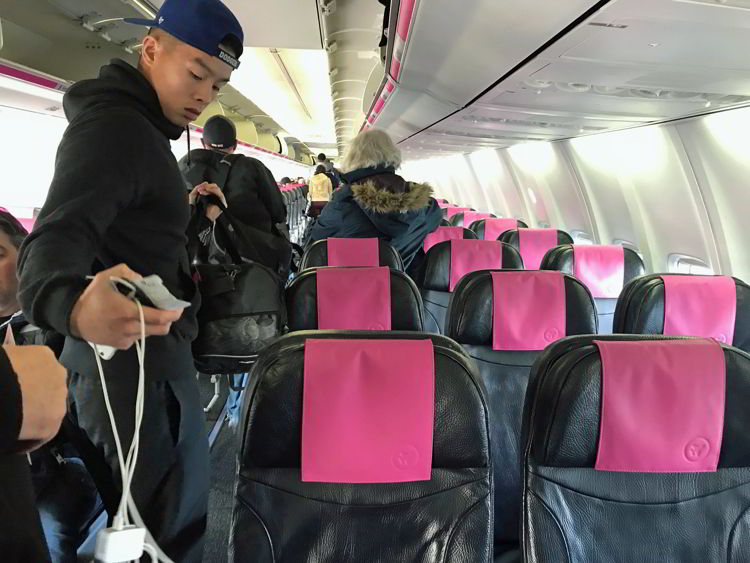 If you don’t pay for seat selection, the airline will randomly seat you when you print your boarding pass. We got the seats on the very back row. Photo by DEBBIE OLSEN

The Worst Seats on the Airplane

If you don’t choose your seats in advance for a fee, the airline will randomly assign you a seat when you print your boarding pass. If you want to change the seat, you will have to pay a fee. I did the online check-in on the outbound flight as early as possible, hoping that might result in a better seat assignment. It didn’t. My husband and I were sitting together, but we were on the very last row of the plane. On the return flight, I checked in later and we ended up seating next to each other in the middle section of the aircraft. It really is random. 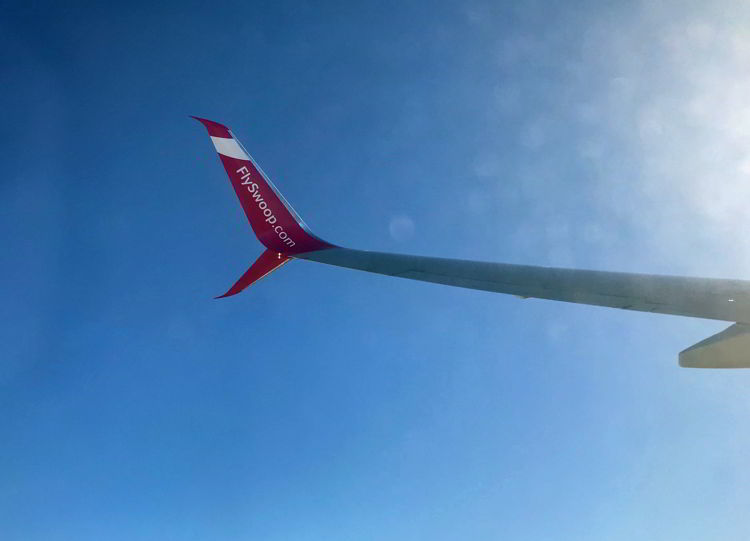 Once we got in the air, the flight went smoothly. Photo by GREG OLSEN

We found the airplane to be comfortable and the service to be professional. Swoop is Westjet Airlines’ discount airline and the planes are similar to others in the Westjet fleet – except for the pink accents. There are plugins at every seat and you can watch in-flight entertainment on your own device. Normally there is a charge for entertainment, but it was free as part of an introductory offer on our particular flight. 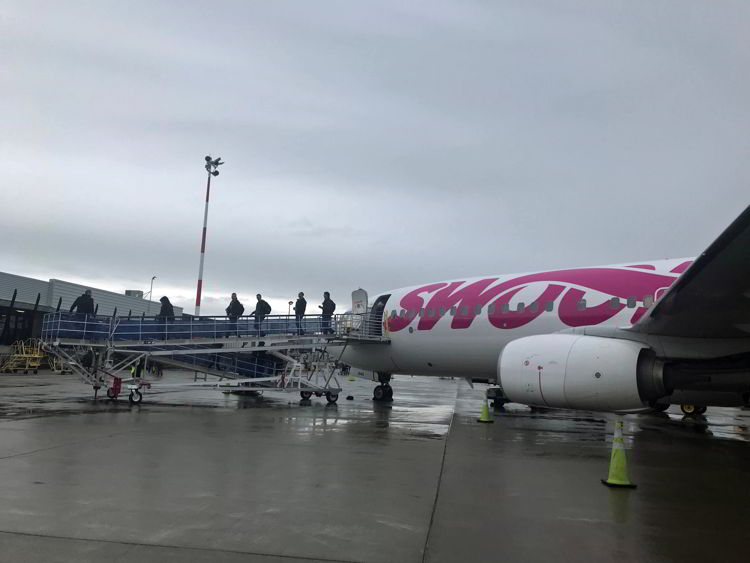 We arrived safe and sound in the pouring rain. Photo by DEBBIE OLSEN

It was pouring rain and we had trouble finding our rental car in the airport parking lot when we arrived, but we can’t really let that affect our Swoop Airlines Review – no matter how much we want to. 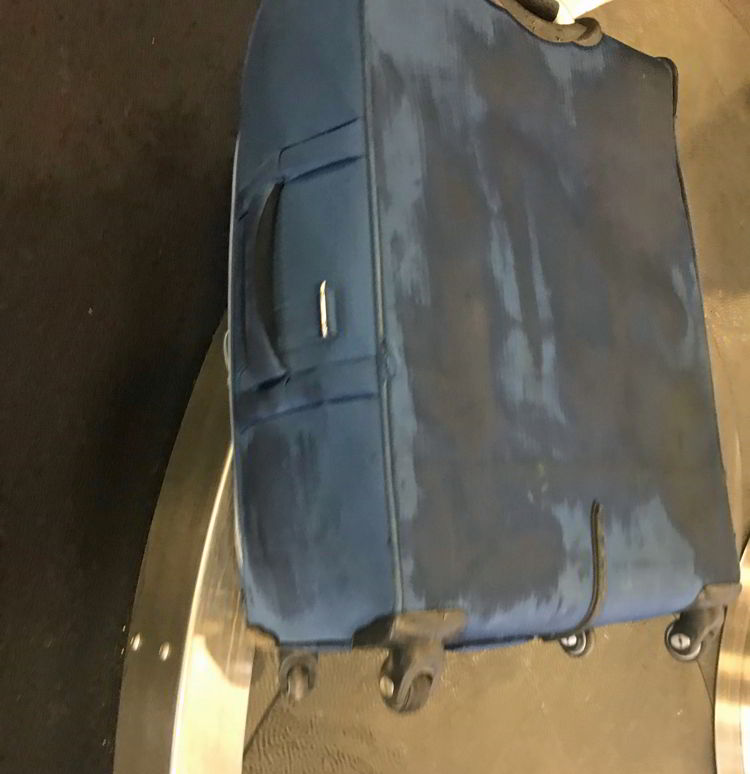 My bag was on the top of the baggage cart, so it got very wet. Lucky me. Photo by DEBBIE OLSEN

Note: Yes I do need new luggage and this is not Swoop’s fault. This new bag should fare better when it gets wet.

Hi-jinks Getting Back to the Airport

Google Maps took us down every back road to get to the Abbotsford Airport. On a gravel road at the back of a runway, it said we had arrived.  At that point, we needed to refuel the rental car, so I plugged “gas” into Google Maps. We headed to the first one on the list and ended up at the Shell Corporate offices. Then we headed to Esso only to discover it was a card lock for semi-trucks. When we finally found a Chevron station, we couldn’t figure out how to unlock the gas tank to fill the tank. We spent several minutes reading the owner’s manual. There was no time left for dinner, so we purchased some beef jerky and potato chips at the gas station. HOT TIP: Never type in “gas” into google maps. Type in “Petrol Station” instead. 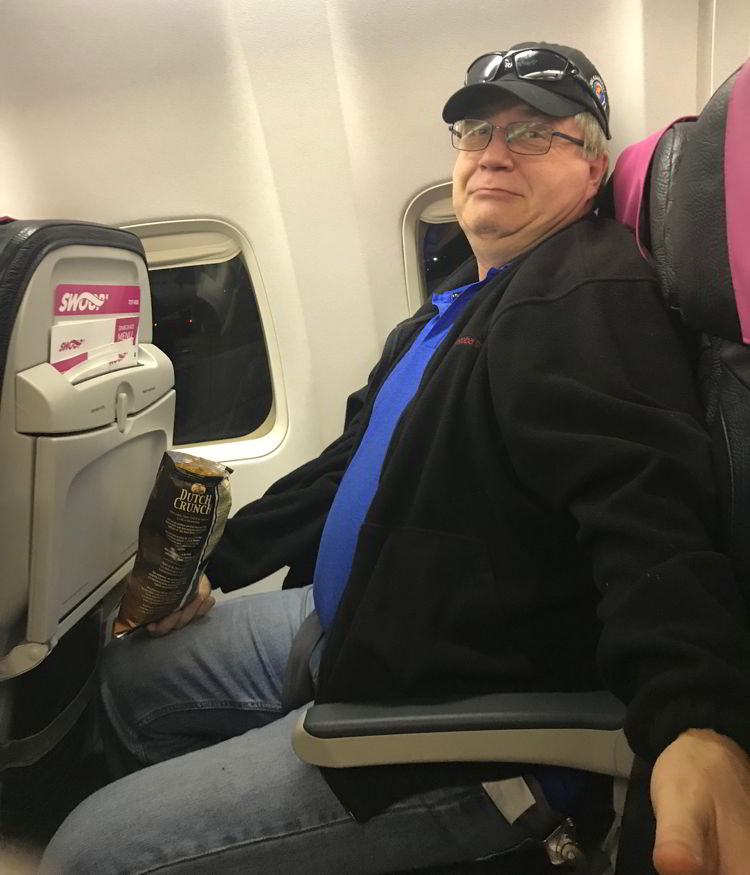 Doesn’t Greg look happy stretching out in the empty seat our drunken seat mate left behind? Those gas station chips were yummy. Photo by DEBBIE OLSEN

The Drunk Guy on Our Return Flight

Our return flight was only ten minutes delayed – mostly because a drunken man had to be escorted off the aircraft by TSA officers. On the upside, he would have been sitting next to us, so my husband and I had an empty seat on which to spread our gas station snack buffet. We’re not sure if the drunk guy made our Swoop Airlines review better or worse. 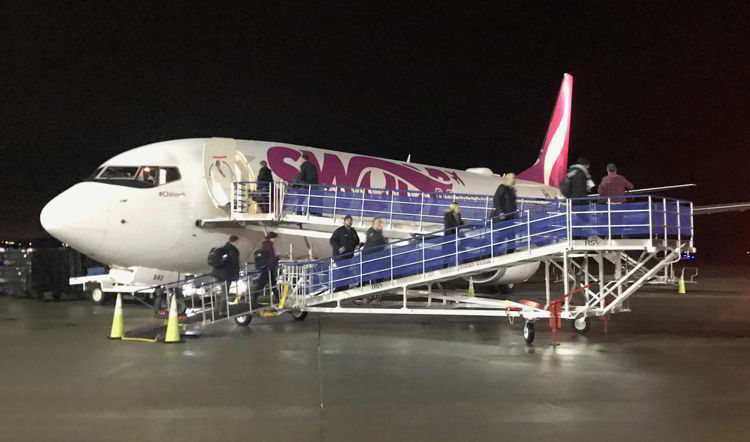 It was not raining when we boarded the flight to go home. Things were looking up. Photo by DEBBIE OLSEN

Related: I travel a lot and Swoop Airlines wasn’t my first uncomfortable budget flight. Here’s one thing I always take in my carry-on bag to make any flight more comfortable.

Swoop got off to a rough start – in our personal experience and in general. In October, the airline made headlines for having to cancel all of its US flights, because it didn’t get the necessary approvals to operate in the United States in time for the flights it had already scheduled and sold tickets for. In our personal experience, both of our Swoop flights were delayed – though the return flight was only slightly delayed. Once we were in the air, the flight was fine, the staff was professional and the pilots got us to our destination safely. Everything wasn’t perfect, but we paid a low price. Ultimately, it is a budget carrier and you get what you pay for.