Taken by Surprise in Ilulissat, Greenland

Our ship slid through the fog on the morning we arrived in Ilulissat, Greenland. It was difficult to see anything through the dense vapor, but we boarded a zodiac and headed into town. As we entered the harbor, the fog lifted and the first iceberg came into view. Minutes later we saw more icebergs and colorful houses. These were our first hints that this remote spot was someplace special. 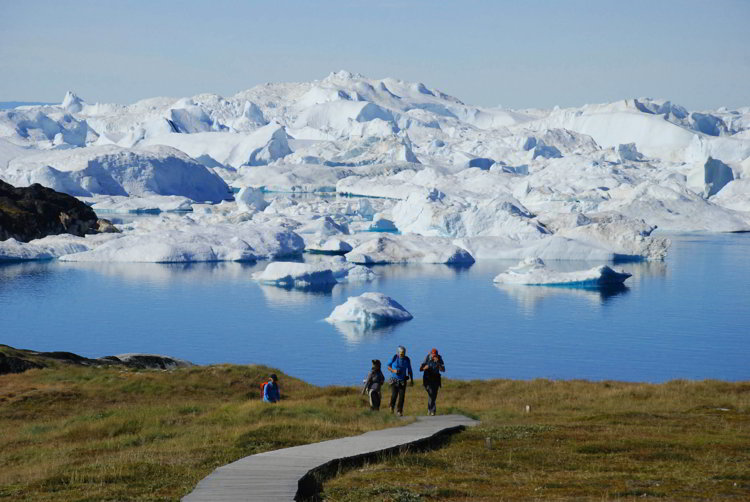 The Ilulissat Icefjord is a UNESCO World Heritage Site and you can walk to it from the tiny town of Ilulissat, Greenland. Photo by DEBBIE OLSEN

Just outside the town of Ilulisat, Greenland is a 40-km long icefjord that sits at the mouth of one of the most active glaciers in the world. The Sermeq Kujalleq glacier calves more than 35 square km of ice annually. To put it simply, this is iceberg heaven. More than 35 billion tons of icebergs pass through this spot every year. It’s likely the iceberg that sank the Titanic originated in Ilulissat. The glacier has been studied for more than 250 years and has helped develop mankind’s understanding of climate change and glaciology. It is such an awe-inspiring natural phenomenon that it was recognized by UNESCO in 2004. 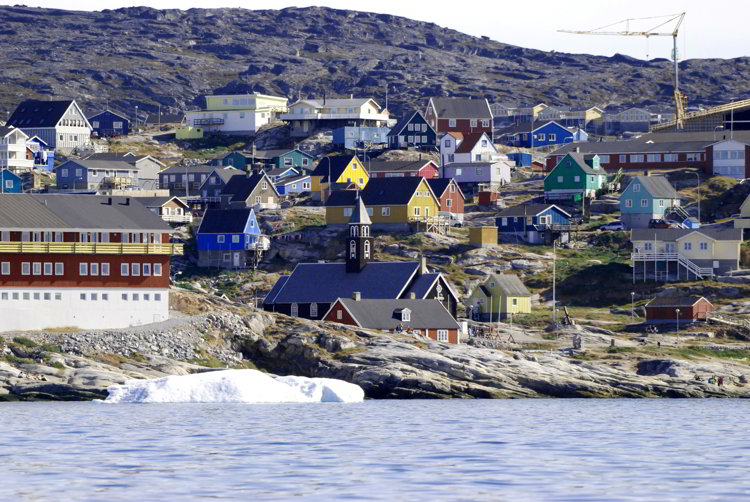 Colorful homes are built right on the rock in Ilulissat, Greenland. Photo by GREG OLSEN

Related: Looking at icebergs is a little like looking at clouds. Read our post Take the Iceberg Pareidolia Test.

Getting to Ilulissat, Greenland

Illulisat is located on the west coast of Greenland about 250 km north of the Arctic Circle. With a population of just under 5000 humans and about 3500 dogs, it is the third largest town in Greenland. The airport can only accommodate smaller aircraft and during the summer months Air Greenland offers regular flights from Copenhagen, Denmark or Keflavik airport in Iceland. Another option is to arrive by ship. We visited Ilulissat, Greenland on an Adventure Canada cruise. 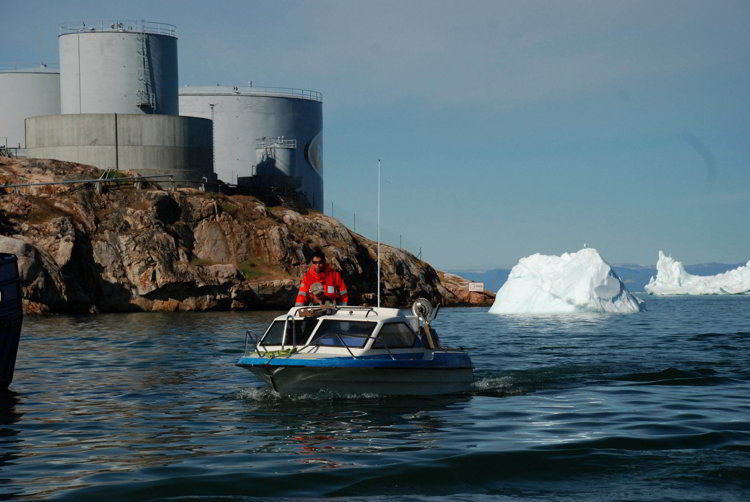 Boats have to weave around icebergs to get into Ilulissat Harbor. Photo by GREG OLSEN

Getting into the harbor was interesting. It’s a busy place filled with fishing boats and icebergs. 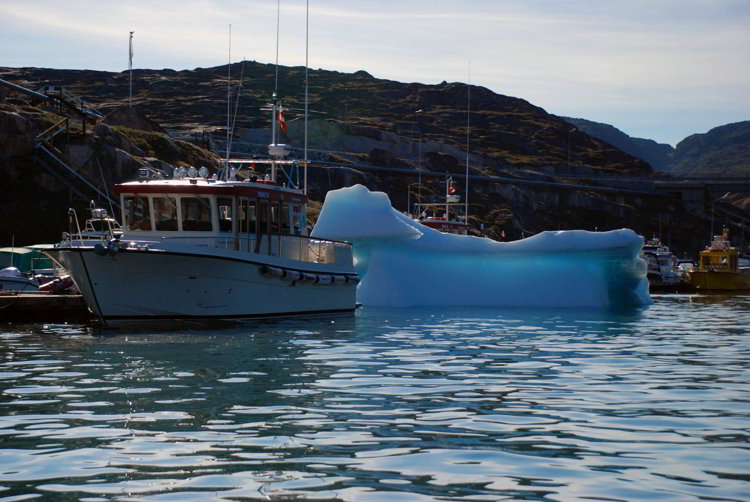 If an iceberg poses a threat to boats, it will be dragged out of the harbor. Photo by GREG OLSEN

Many of the people who live in Ilulissat, Greenland own fishing boats. Fish and seals are an important part of the diet in this remote place. 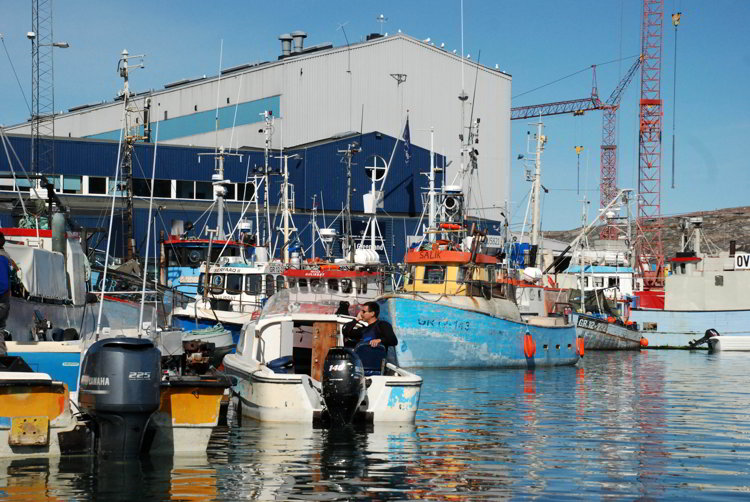 For such a small town, the harbor is fully equipped. Most of the supplies arrive on container ships during the summer months. Photo by GREG OLSEN

Once we were all the way into the harbor, we could see that boats are the primary source of mobility for most people during the summer. Beyond the sea vessels we found a harbor fully equipped to receive tanker ships during the summer months when the harbor is accessible.

The Town of Ilulissat, Greenland 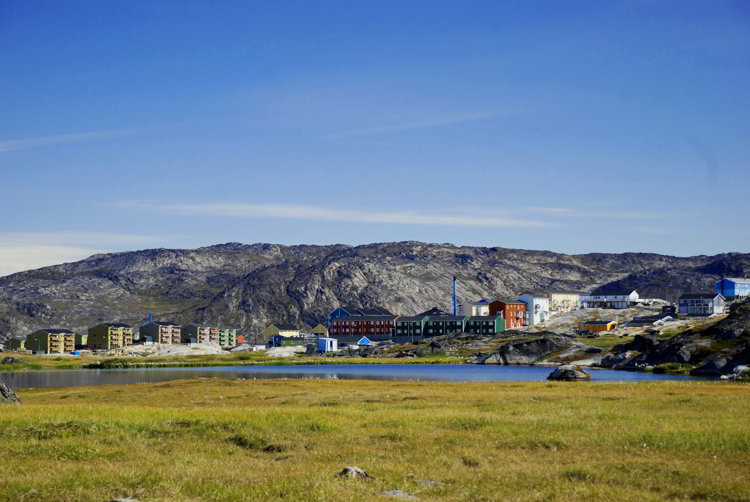 Houses are literally built on rock in Ilulissat, Greenland. There’s something beautiful about the remoteness of this little community. Photo by GREG OLSEN

The first thing we noticed about Ilulissat, Greenland was the vibrant colors of the homes. Secondly, we noticed that everything is built on rocks, one big rock. 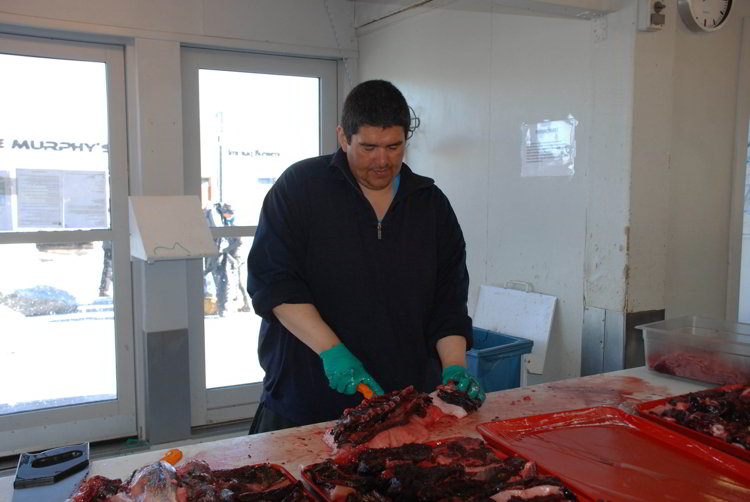 A visit to the fish market is a unique experience. Photo by GREG OLSEN

One of the central hubs would have to be the fish market. The sea provides most of the local diet and a visit to the fish market is a must. Other than that, there are a few tourist shops and restaurants. Some fellow cruise passengers stopped at a restaurant and enjoyed a muskox burger before the trek to the icefjord.

A well defined path took us from the townsite to Ilulissat Icefjord, a UNESCO World Heritage Site. 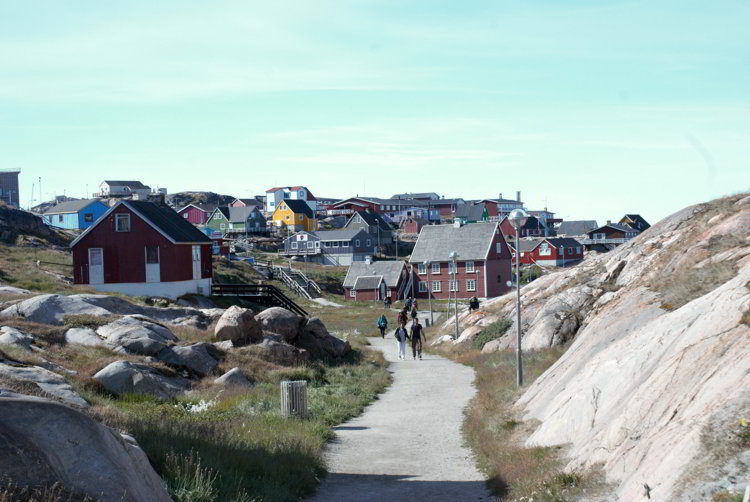 It’s a short hike to the Ilulissat Icefjord and the path is well laid out. Photo by GREG OLSEN

It’s a short 20 – 30 minute hike to get to the icefjord and there are interesting things to see along the way. 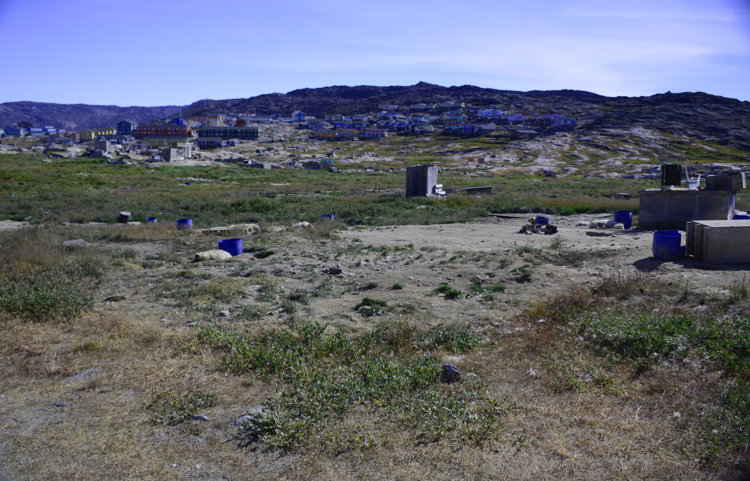 This large field is home to many of the sled dogs in this town. Photo by GREG OLSEN

It is difficult to tell by this picture but hundreds of sled dogs sleep peacefully during the day as they look forward to winter and the opportunity to go to work. They are not far from the path, but you should steer clear of them. These are working dogs and they have been known to bite well-meaning travelers who try to pet them. 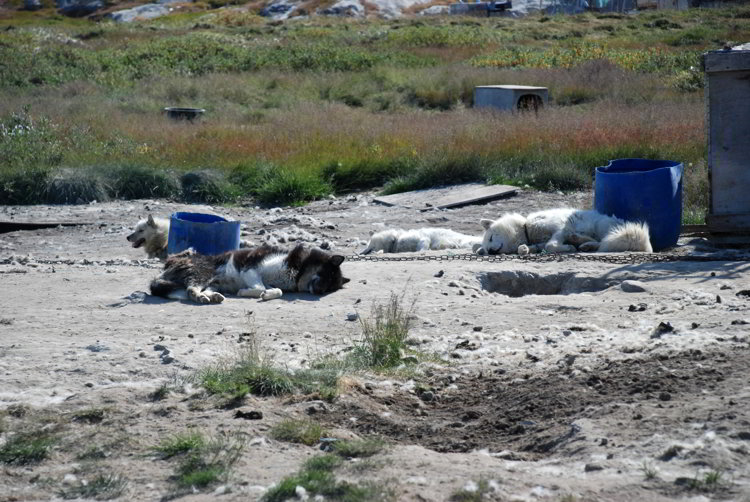 The heat of the summer finds the sled dogs sleeping and trying to stay cool. Photo by GREG OLSEN

The dogs were sleeping peacefully when we walked by, but we were told that they can make a lot of noise at certain times of the day – like dinner time. Apparently you can hear their howls all the way in town when they’re hungry. 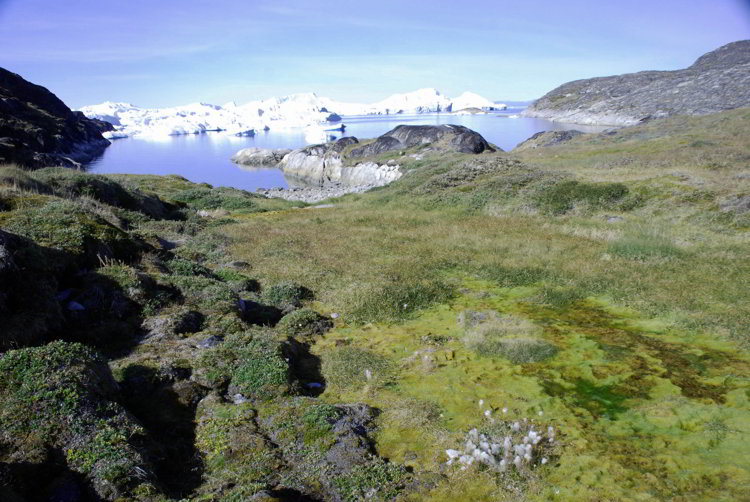 From a distance, we caught our first glimpse of the Ilulissat Icefjord. Photo by GREG OLSEN

We hiked along a boardwalk that protected the fragile tundra. It wasn’t long before we saw the mouth of the icefjord in the distance and icebergs that were making their way out to sea. It was amazing to see the massive icebergs up close, but our favorite activity was sitting on a rocky overlook and listening to the ice crack and calve off the glacier. 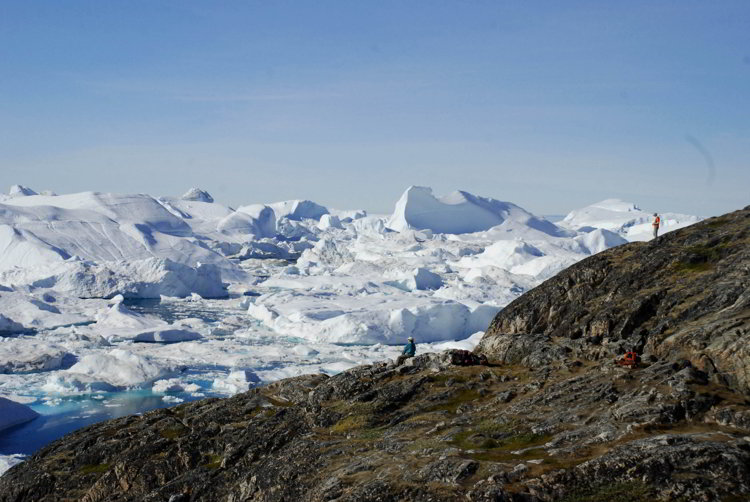 We were overwhelmed by the vastness of the icefjord. Photo by GREG OLSEN

From the safety of the rock, we sat and listened to the creaks and moans of the ice as it calved from the glacier and floated down the fjord toward the ocean. It’s one of those big places that makes you feel a sense of your own smallness. 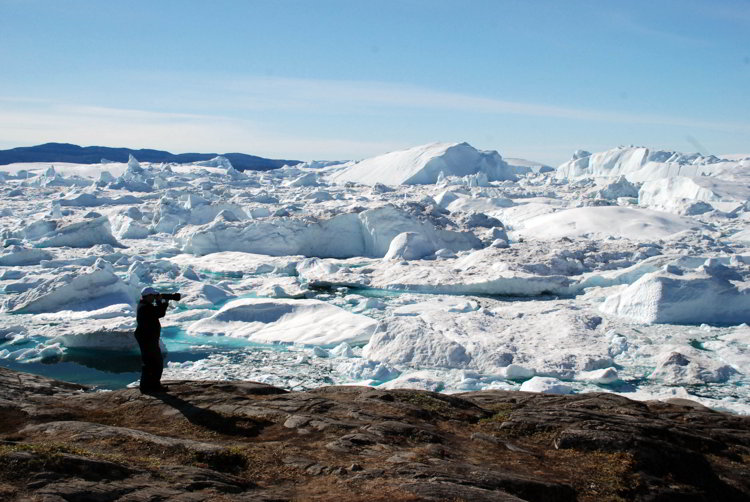 The ice in the fjord is constantly changing, which is great for a photographer. Photo by DEBBIE OLSEN

It is tough to pull a photographer away from the icefjord, a landscape that is constantly changing shape and color. The foggy morning had transformed into a beautiful sunny day and we stayed for hours photographing the glacier and the many icebergs. 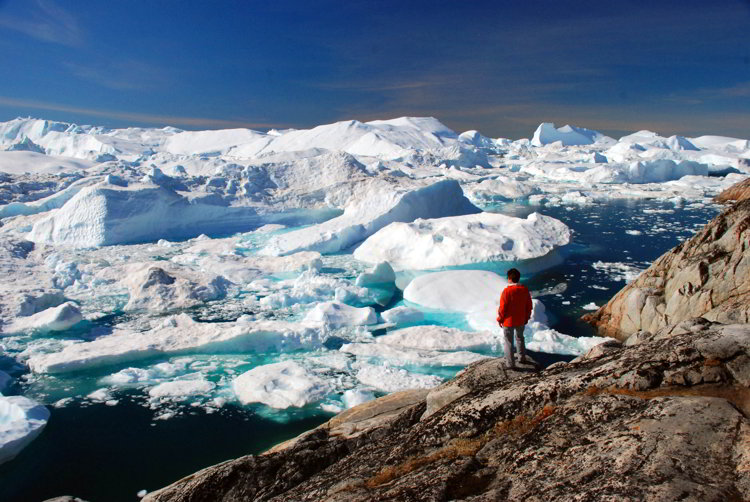 The colors of the ice and water are truly remarkable. Photo by GREG OLSEN

As we gazed down at the icefjord, we really appreciated the colors and textures of the icebergs. We spent several hours there, but we could have stayed longer. It was so stunning.

See the Big Bergs on a Boat Tour 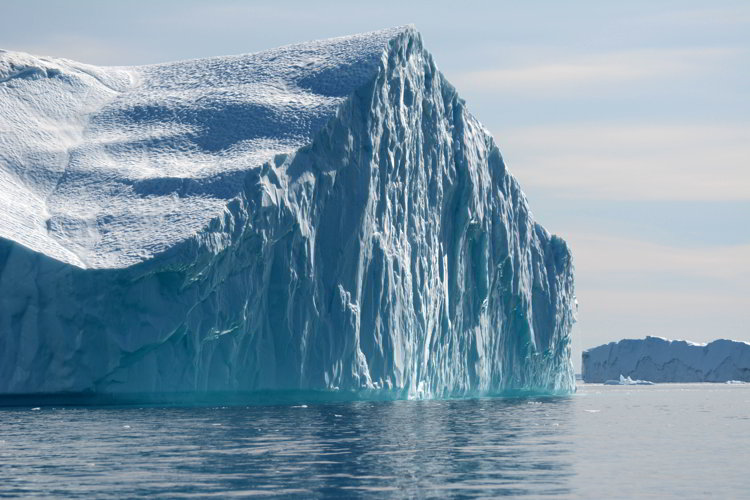 This massive iceberg was released to the ocean current. Photo by GREG OLSEN

To truly appreciate what comes out of the icefjord, you need to get into a boat and venture out of the harbor. When you look at these massive bergs, it’s incredible to realize that only 10 percent of an iceberg’s total mass is above water – 90 percent is below the water. 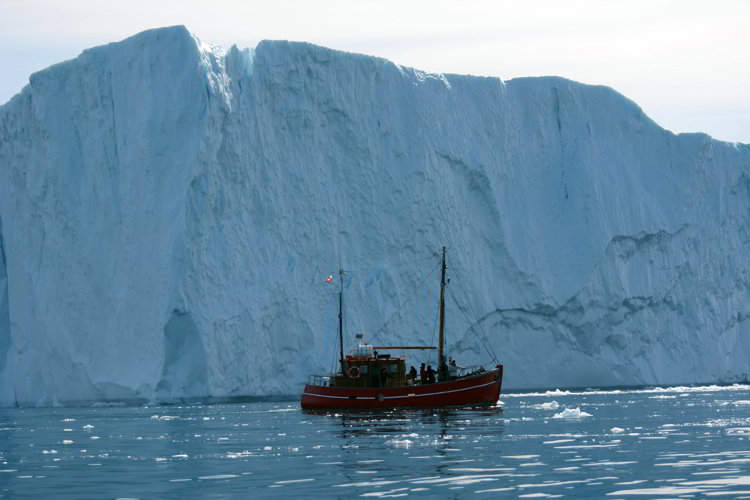 From Ilulissat, Greenland you can take a boat tour to look at giant icebergs. Photo by GREG OLSEN

This boat is dwarfed by the iceberg that moves at a snail’s pace as the currents begin to carry it out to sea. 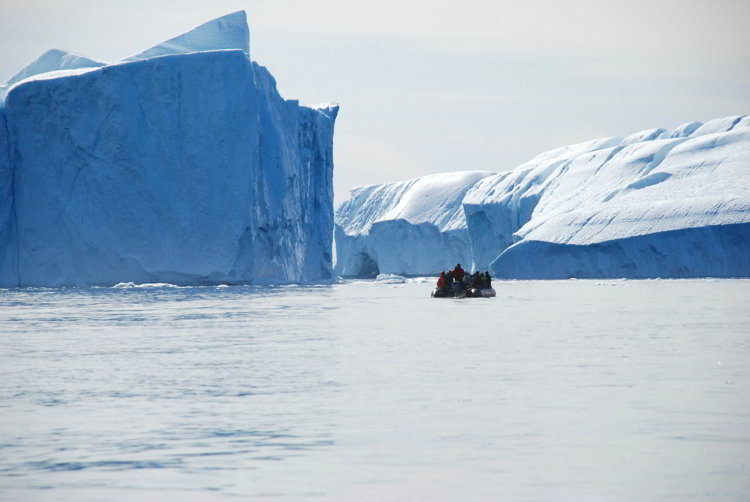 From a distance this ice mass looks like one large iceberg. Photo by GREG OLSEN

A zodiac looks at three separate icebergs. Look to the next picture to see the three bergs. 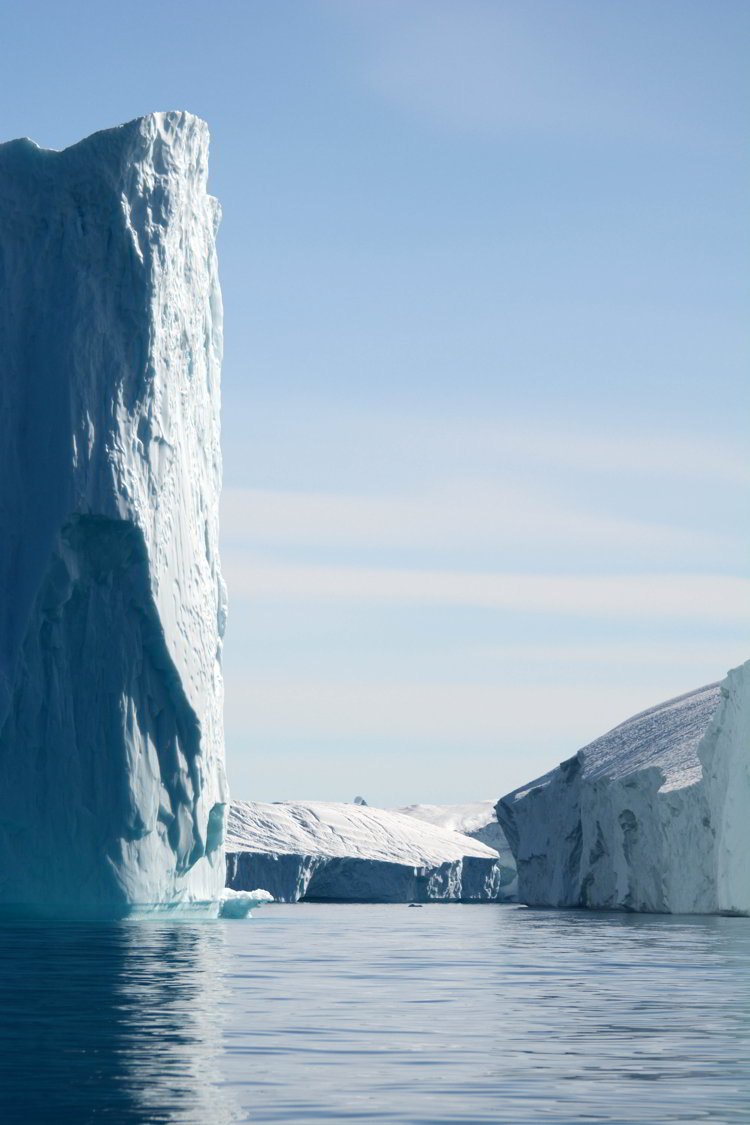 Icebergs come in all shapes and sizes. They are constantly changing as the iceberg melts and breaks apart. Boats have to be careful not to get too near these Goliath icebergs. When an iceberg calves, a falling chunk of ice can be very dangerous. 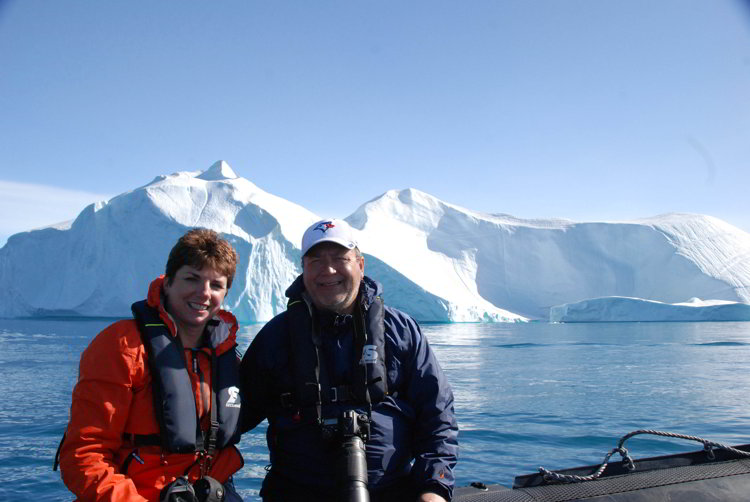 We enjoyed a zodiac tour to see the icebergs near Ilulissat, Greenalnd.

I normally don’t like the cold but on this day we were like kids in a candy store. We were wide eyed and our cameras were busy trying to capture the beauty and the magnitude of these ice giants. 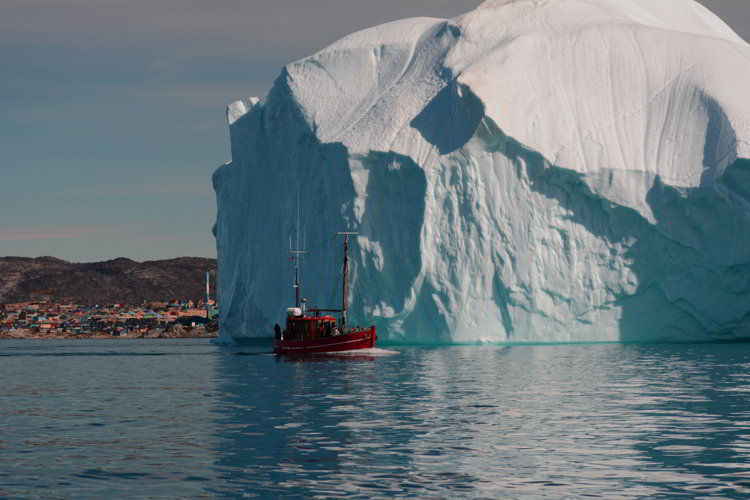 The town of Ilulissat, Greenland is visible behind this huge iceberg. Photo by GREG OLSEN

This massive iceberg dwarfed the town of Ilulissat, Greenland. In fact, it would have easily covered the entire town. Eventually, the current carried it out to sea like so many others before it. That’s what makes this little spot on the planet the birthplace of icebergs.

Fresh snow and the vibrant colours of Grassi Lakes

The views along Icefields Parkway are amazing but

The view from atop Sulphur Mountain. Rainbow seems

Lake Louise is a great place to go to regenerate a

The colours of Moraine Lake are stunning! No filte

An amazing kitchen, an amazing dining room, and am

Had a blast rock climbing in #jasper with #jasperh