The wildlife of the Galapagos Islands has a lore all its own. It was a visit to these remote islands that inspired Charles Darwin’s Theory of Natural Selection. Since Darwin’s time, these far-flung Ecuadorian islands have become one of the world’s top destinations for wildlife watching. It’s difficult to establish a must-see list of Galapagos Islands animals, but here’s my top ten. 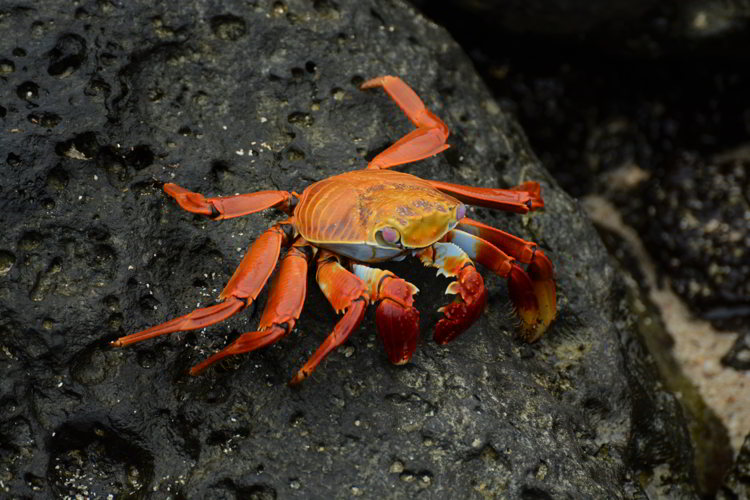 These coastal scavengers play an important environmental role by cleaning up organic debris on beaches and shorelines.

The “red rock crab” can be found on rocks and in shallow water near shorelines. They are very agile and it’s rumored that they were named for an equally agile Caribbean dancer. Their colors are very vibrant and adult crabs have blue and red coloring on their shells.

Related: Read our post about Polar Bears and Other Arctic Species in Churchill, Manitoba. 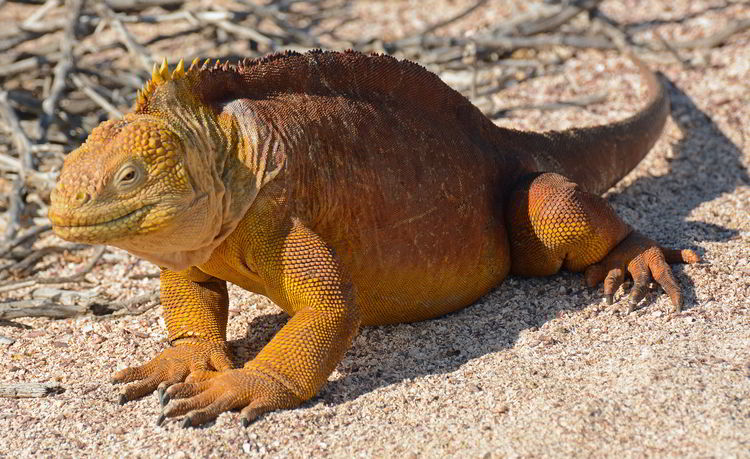 The Galapagos land iguana looks absolutely prehistoric. It is endemic to the Galapagos Islands.

The Galapagos land iguana looks like a tiny dragon or some other mythical creature. It is endemic to the Galapagos Islands, but their numbers have drastically declined since Darwin’s time. 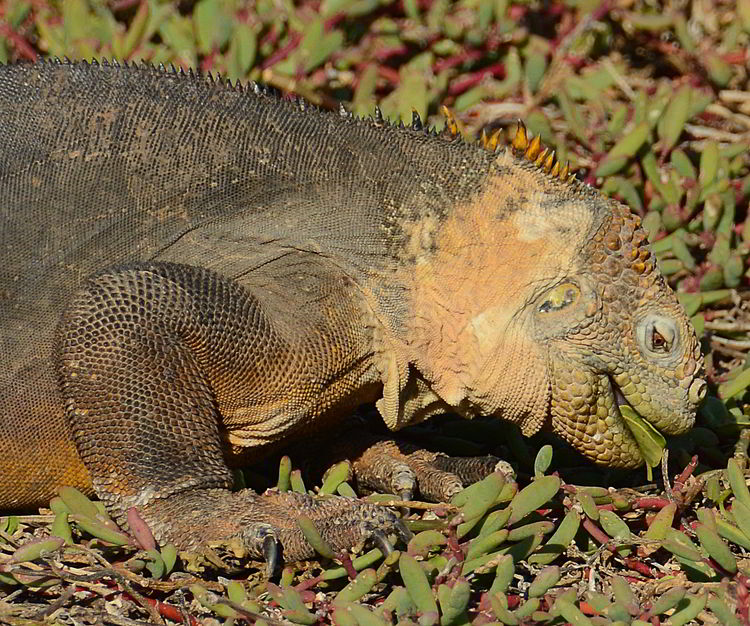 Despite its intimidating appearance, the Galapagos land iguana is a herbivore. It feeds on prickly pear leaves and fruit.

Introduced species like cats, dogs and goats have devastated the land iguana population. Cats and dogs kill iguanas and goats wipe out the vegetation that the species relies on for food. 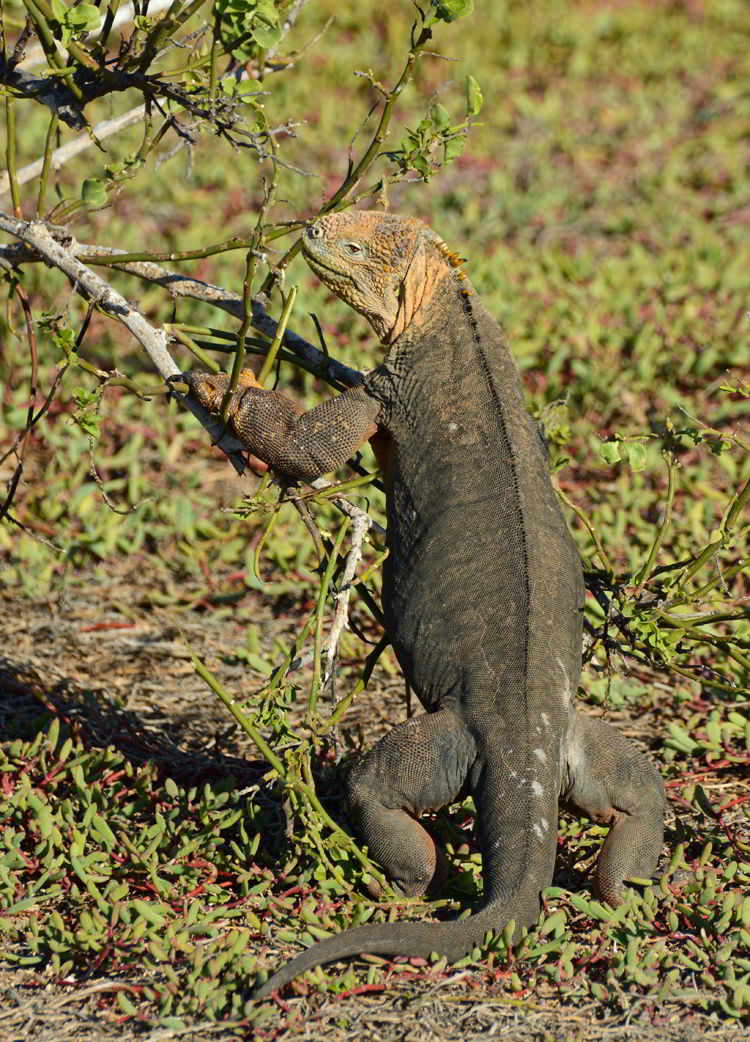 A captive breeding program on Santa Cruz and other conservation efforts are making a difference for the Galapagos land iguana. 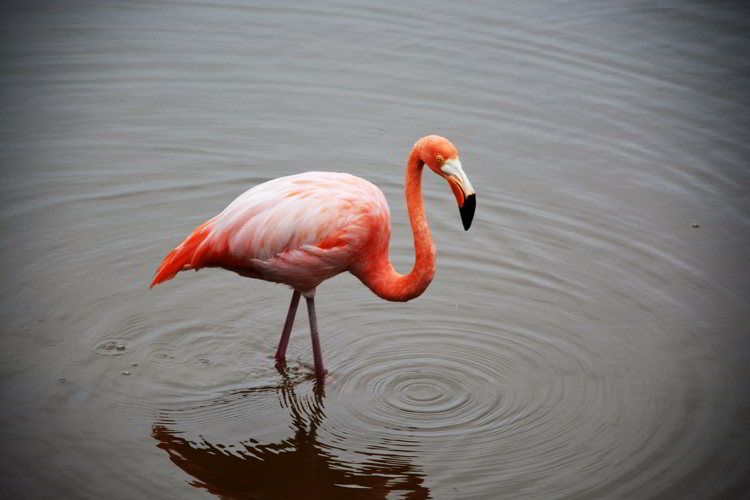 The Galapagos flamingo feeds on small crustaceans and tiny water plants. Its distinctive beak helps it to separate mud and silt from the food.

Flamingos can be found throughout the Galapagos Islands, but larger colonies are visible on Floreana, Isabela, Santiago, Rabida and Santa Cruz  Islands. 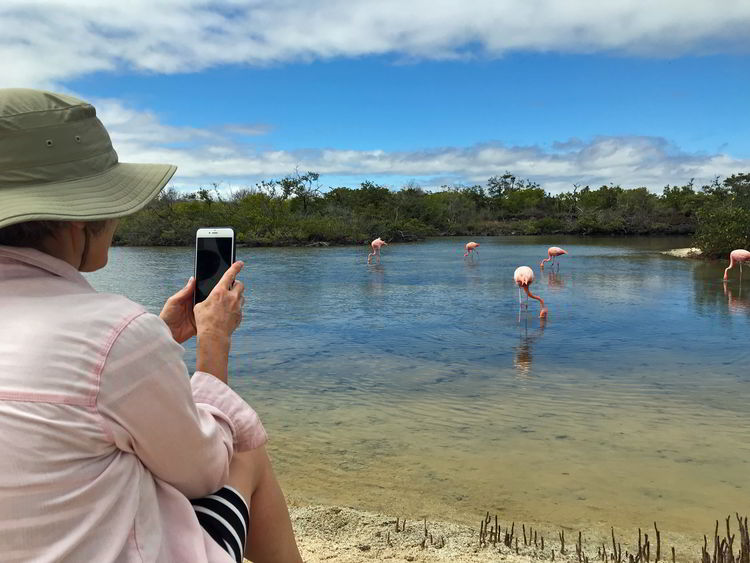 Galapagos flamingos get their brilliant color from their diet. The crustaceans that are their primary food source contain carotenoids, which are expressed in the bird’s bright pink feathers. 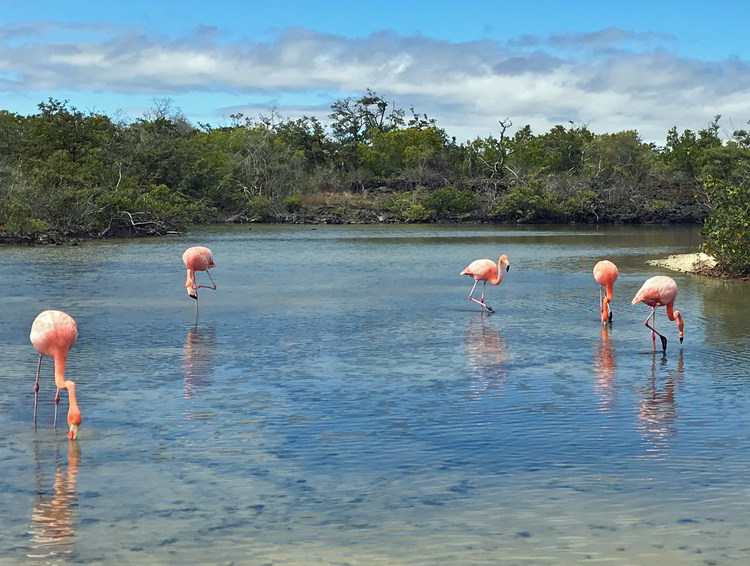 Galapagos flamingos often stand on one leg. It is thought that this resting position conserves body heat and reduces cardiac effort. 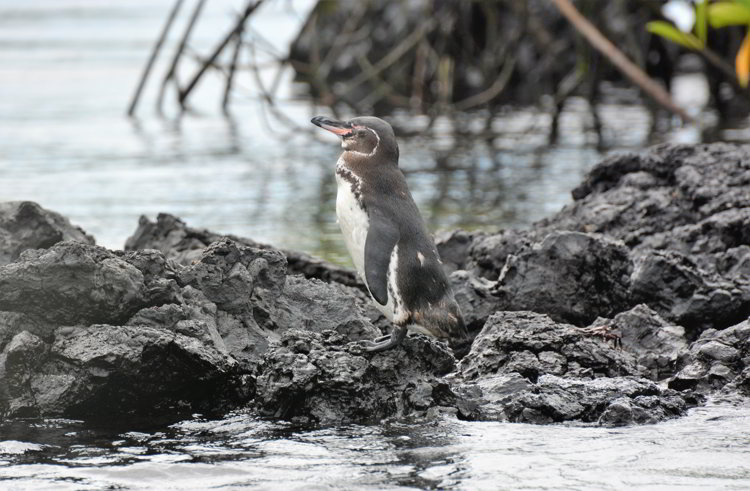 The Galapagos penguin is the only penguin that lives north of the equator. 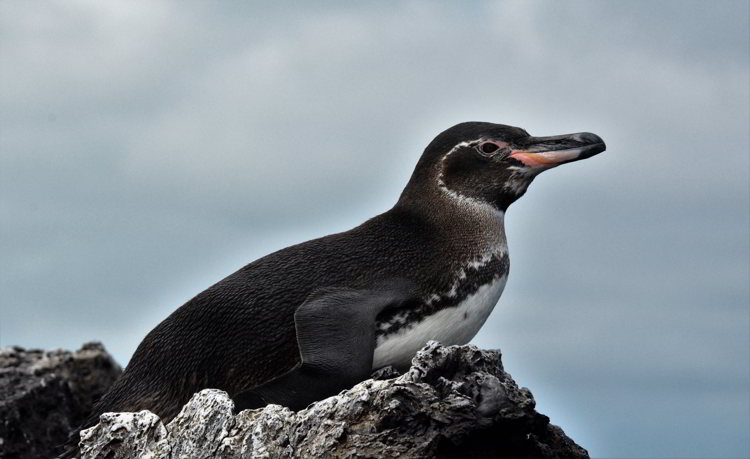 One of the smallest penguins in the world, the Galapagos penguin mates for life. 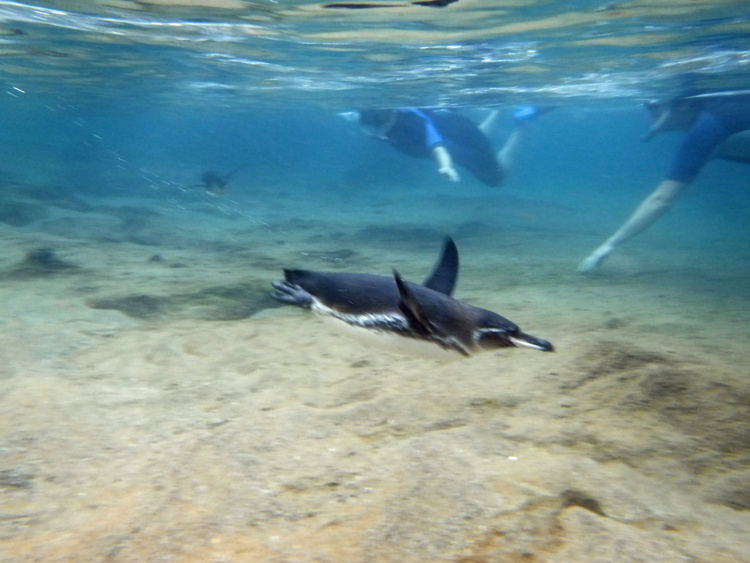 Galapagos penguins can seem clumsy on land where they sleep, but they are incredibly agile in water. 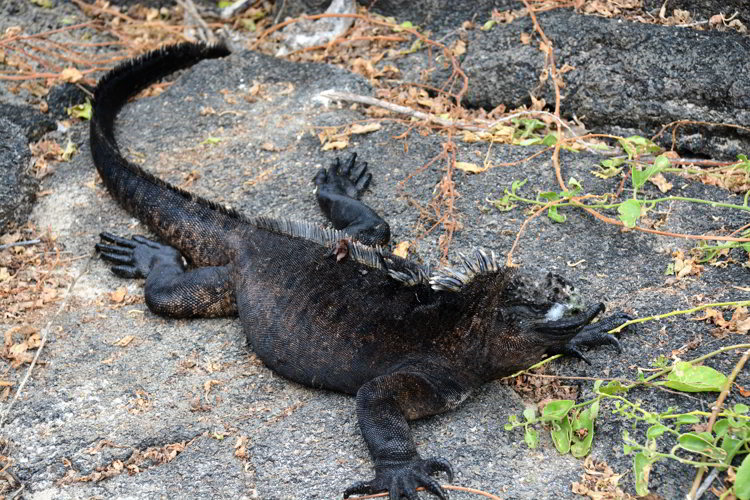 You often sea salt crystals on the faces of marine iguanas, because they have special salt ducts that allow them to excrete excess salt from their body. They expel the salt by “blowing” it out of their noses.

Marine iguanas are only found in the Galapagos Islands. They have adapted to feed almost exclusively on sea algae. They live in colonies on rocky shores, but they can also be found on beaches and in mangroves. 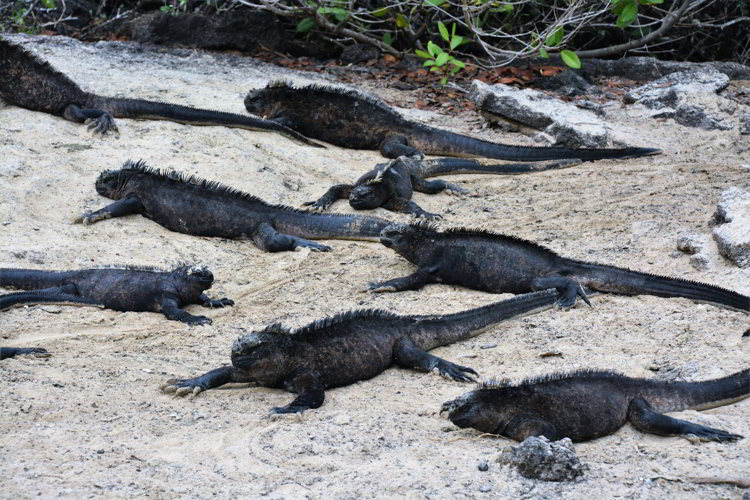 Marine iguanas vary in appearance between islands and several sub-species have been identified. 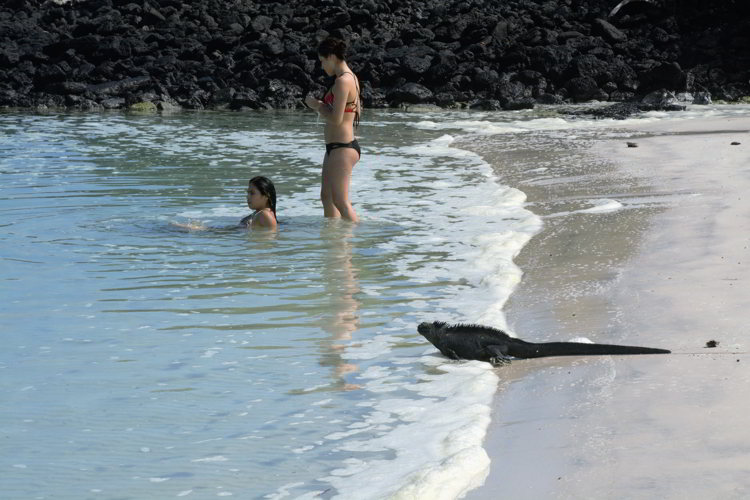 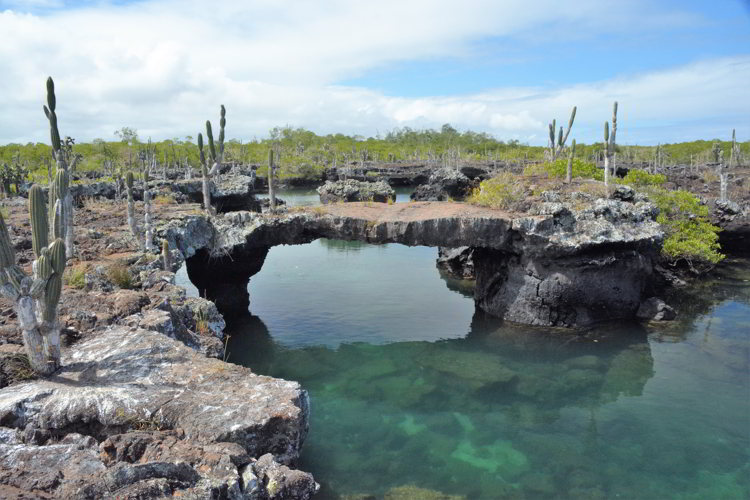 Los Túneles near Isabella Island is a sea sanctuary that is a great place to see the Galapagos green turtle.

The  Galapagos green turtle is the only sea turtle species to breed and nest in the Galapagos Islands. It is frequently seen on snorkel trips in the archipelago. 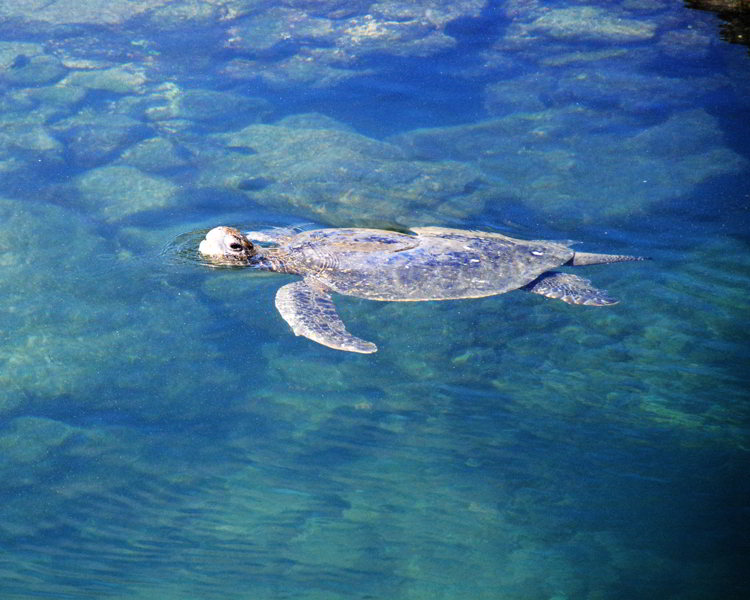 From December to March, pregnant females lay their eggs on beaches at night. 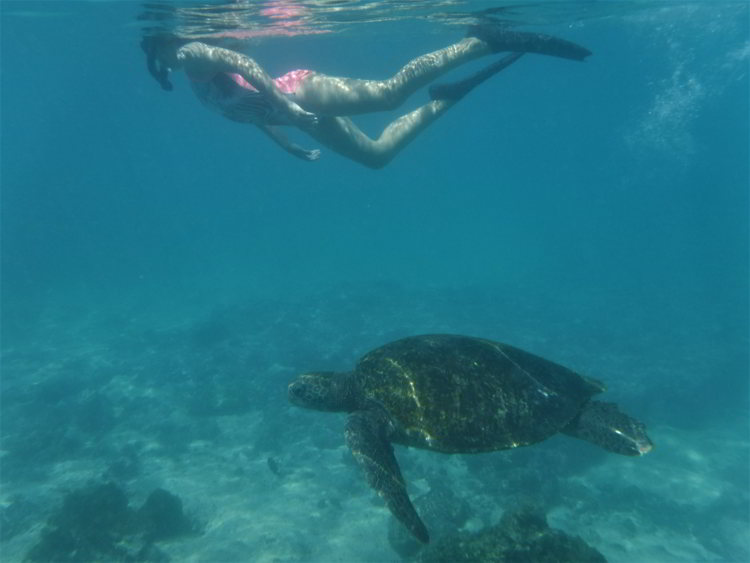 Snorkeling with these gentle giants is one of the thrills of visiting the Galapagos Islands.

Galapagos green turtles can be seen in coastal waters throughout the year and are also seen in a few other places around the world, though they only nest in the Galapagos Islands. 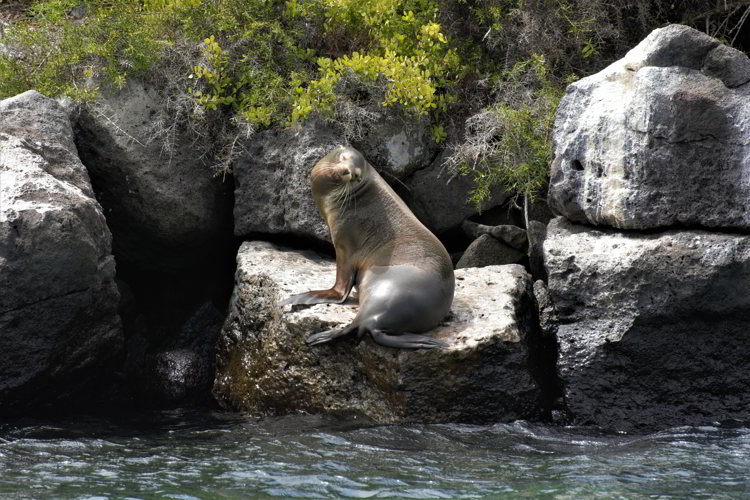 The loud bark and playful nature of the Galapagos sea lions welcomes visitors.

The Galapagos sea lion breeds exclusively in the Galapagos Islands and in smaller numbers on Isla de la Plata in Ecuador. They are the smallest of the sea lions and can be spotted on rocks, on docks and swimming gracefully in the surf. 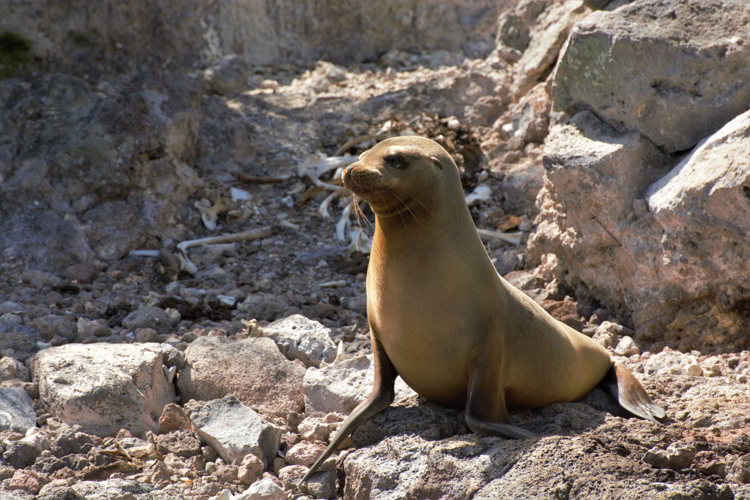 Sharks and killer whales are the biggest predators of Galapagos sea lions – especially young ones. 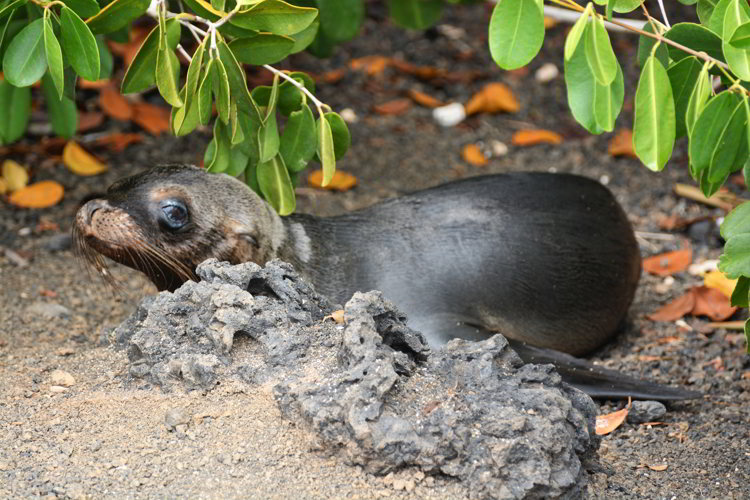 A sea lion pup is born with a longer, brownish-black coat that gradually fades to brown within the first five months of life. 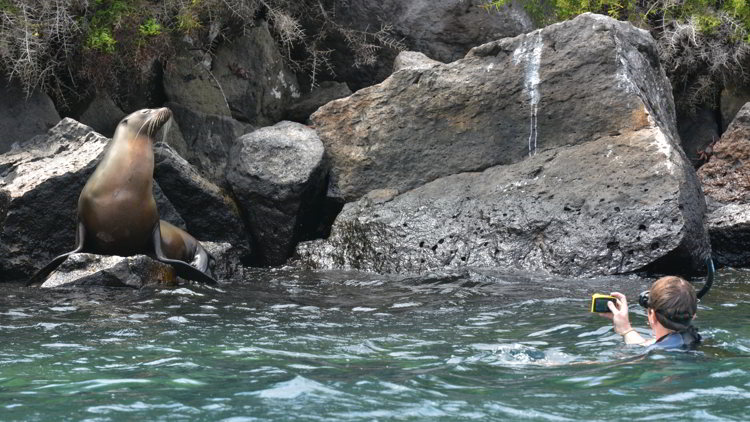 Snorkeling with sea lions is a popular excursion in the Galapagos Islands.

Snorkeling with sea lions is an amazing experience. They are a curious and very social animal. Be wary of the mature bull (male) of the colony as sometimes they can be  aggressive. 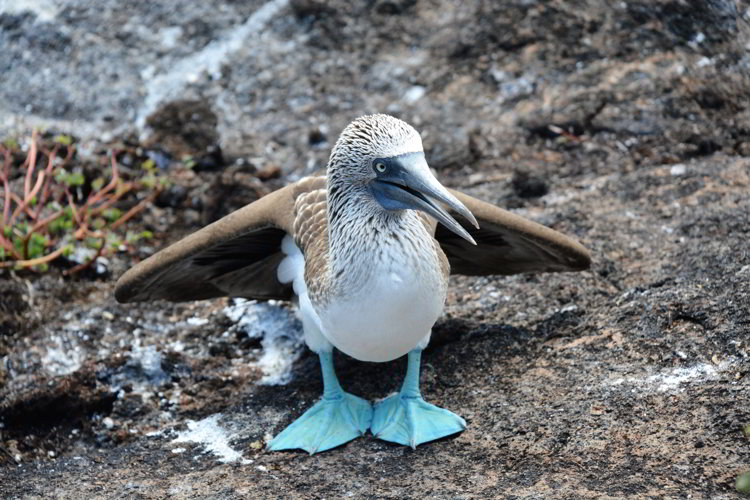 Carotenoid pigments in the diet of a booby get concentrated in their feet. Females are attracted to males with very bright feet – a sign that they are very healthy.

The blue-footed booby is clumsy on land, but incredibly agile in the air. They feed on small fish and will dive from high distances above the water.The name booby comes from the Spanish word bobo which means “stupid, foolish, or clown” and describes how awkward the bird is as it moves about on the land. 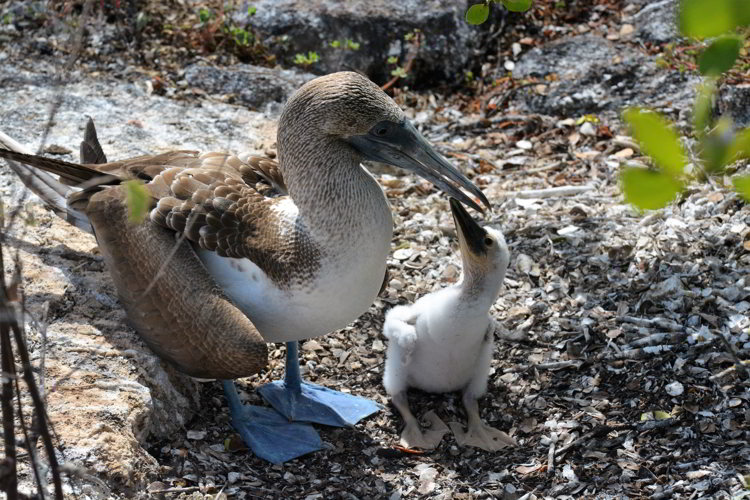 A blue-footed booby chick looks to its mother hoping to find some food. 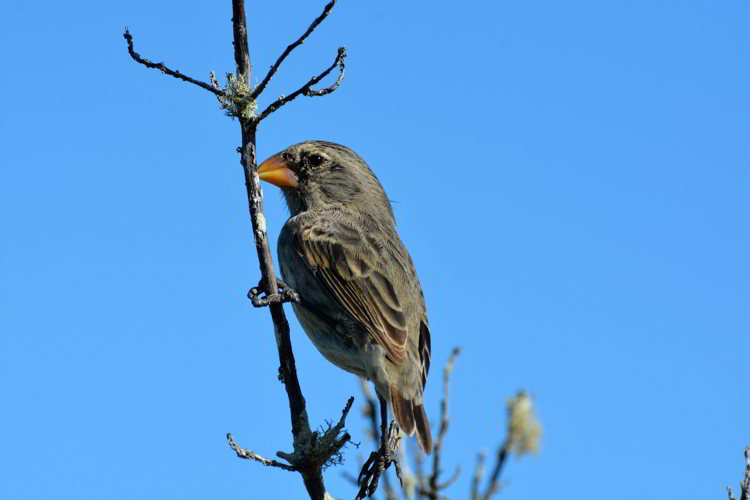 You’ll want to get a picture of a Darwin’s finch when you visit the Galapagos Islands.

The Galapagos finch, also known as Darwin’s finch is not a true finch, but a group of about 15 species of passerine birds found on the Galapagos Islands. Charles Darwin noticed that each of the species looked similar with the exception of the beak which was uniquely shaped for the kind of food the bird ate on a particular island. These birds provide evidence of Darwin’s Theory of Natural Selection and the name “Darwin’s finches” was popularized in 1947 in his honor.

The Galapagos mockingbird inspired Darwin to look closer at different species and consider the possibility of adaptation.

Many people believe it was the finch that first inspired Darwin’s theory, but it was actually the mockingbird. Darwin noticed that the mockingbirds he had collected from different islands were not all alike and this “thoroughly aroused” Darwin’s attention to the peculiar distribution of species in the Galapagos Islands. 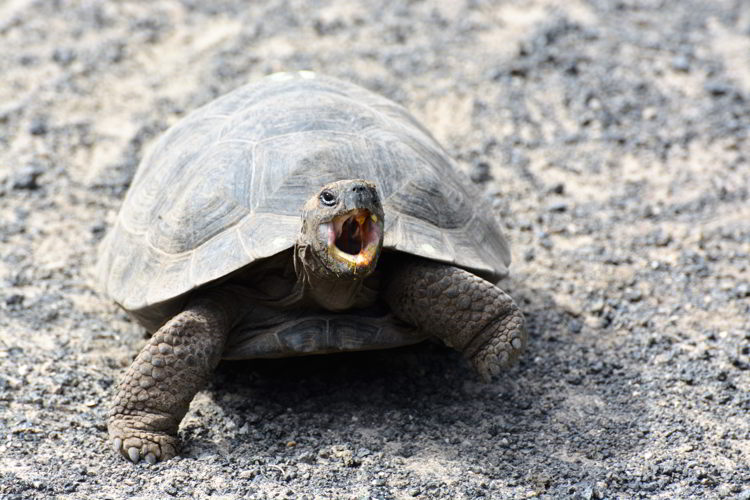 The Galapagos giant tortoise is the largest living species of tortoise and can weigh up to 417 kg (919 lb). 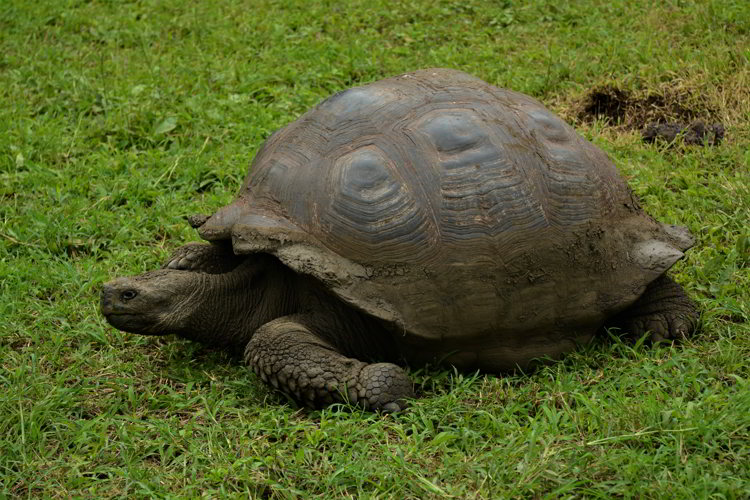 The Galapagos giant tortoise has no natural predators.

Their slow movement made it easy for them to be exploited. From the 15th through the 18th century their numbers declined dramatically. 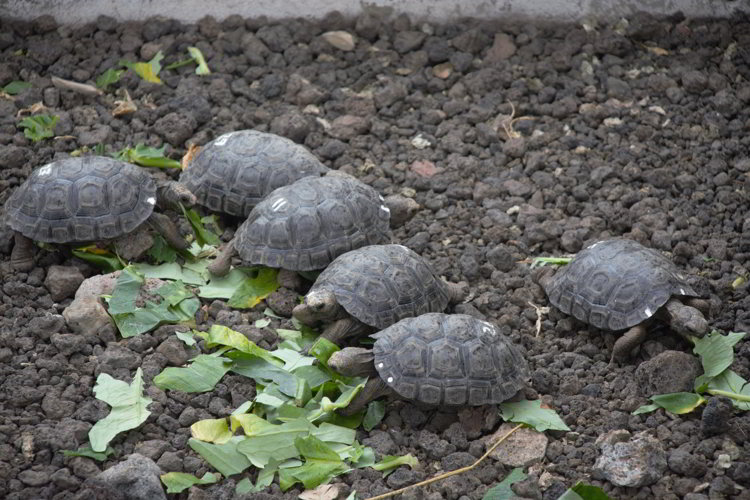 A captive breeding program and other conservation efforts are helping to restore tortoise populations.

Successful breeding programs have helped bring population numbers back, but some species are now extinct. With such a small number of tortoises available for breeding, geneticists have a challenge in maintaining the genetic diversity of the populations. 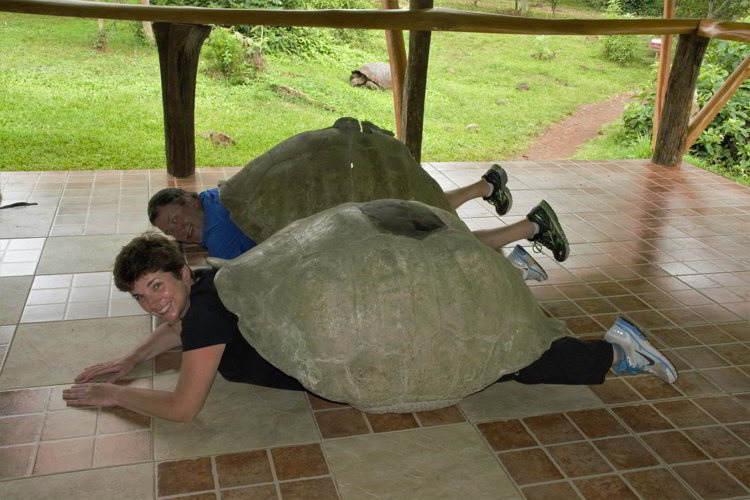 We tried on a couple of giant tortoise shells to see what it felt like to be a tortoise. (It was heavy…)

Another important aspect about the recovery of the Galapagos tortoise is education. As more people understand these gentle giants, we increase the chance they will be around for future generations to admire. 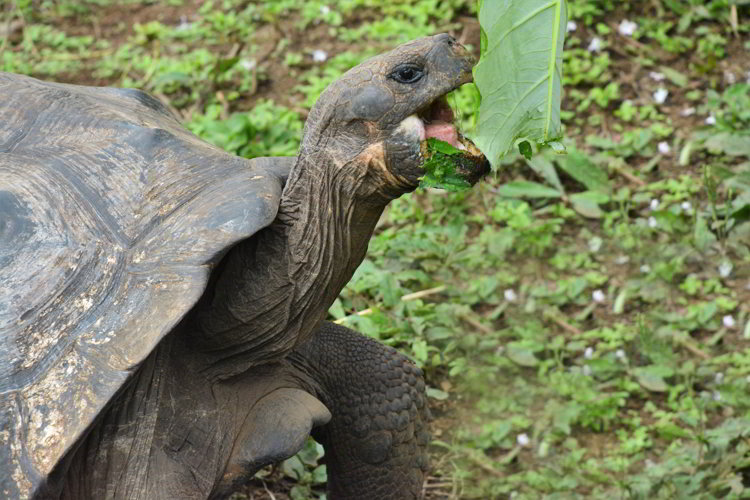 If you enjoy articles about wildlife, check out our post about a Self-drive Safari in Namibia, Africa.

The 1953 Marilyn Monroe film River of No Return fe