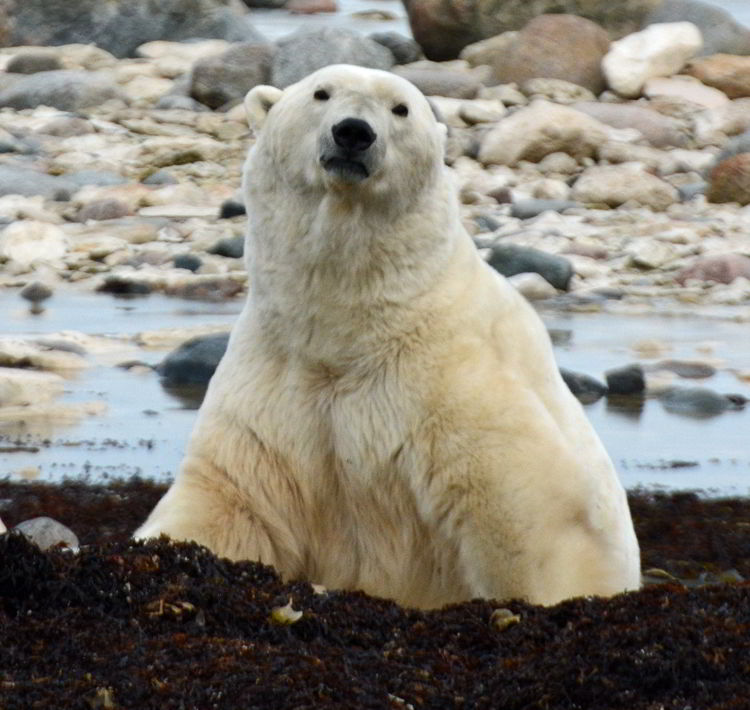 Polar bears need ice to survive and global warming is a serious threat to their survival. They use the ice as a platform to hunt their primary prey – seals. Photo by DEBBIE OLSEN

October to November is the prime time for Churchill polar bear tours. A stay at Churchill Northern Studies Centre  (CNSC) is a great way to see and learn about polar bears and other Arctic species. 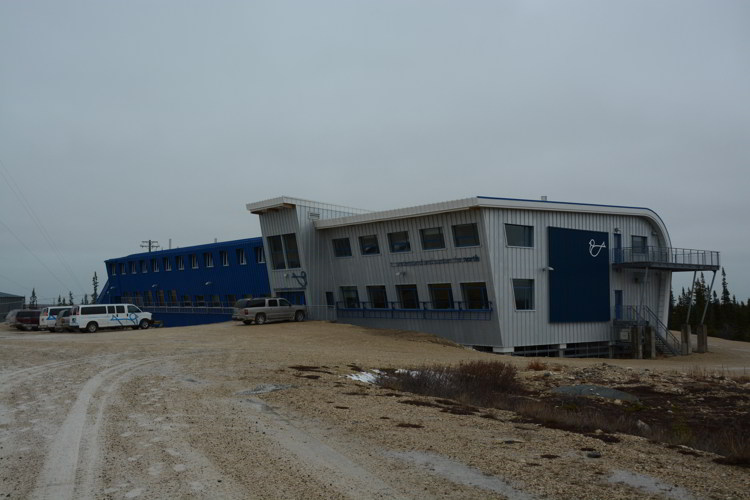 The Churchill Northern Studies Centre is a facility where researchers study polar bears and other Arctic species. It also has dormitories and offers unique Churchill polar bear tours that help to fund the centre. Photo by DEBBIE OLSEN

Why is Churchill the Polar Bear Capital of the World?

When slushy ice starts to form in Hudson Bay, polar bears begin to gather near Churchill, Manitoba. It’s a phenomenon that’s been occurring for centuries. The bears gather here because ice forms sooner than it does in other places in the Arctic. Hudson Bay is part of a large inland sea system where freshwater and Arctic marine seawater mix. The lower salt concentration in the water allows ice to form sooner than it does in other places and for bears that means they can get out on the ice and start hunting sooner. 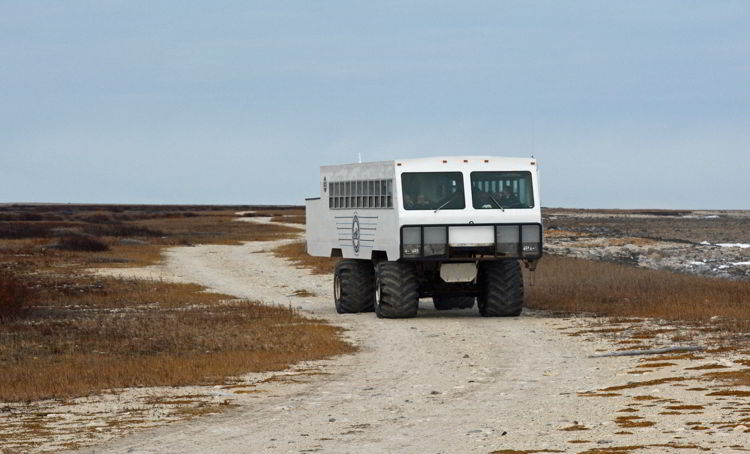 A  tundra buggy is a safe way to see polar bears in the wild. They are used by local companies to provide Churchill polar bear tours. Photo by DEBBIE OLSEN

Related: Read our post and see our amazing photos of a self drive safari in the Canadian Rockies.

There are several companies that offer Churchill polar bear tours, but tours supplied by the non-profit Churchill Northern Studies Centre help to support scientific research. They also allow participants to interact with and learn from some of the top Arctic researchers in the world. Located 23-km outside Churchill, the LEED silver certified centre has research labs, dormitories, a cafeteria and other facilities that are used by scientists and visitors. “I couldn’t do my research without the Churchill Northern Studies Centre,” asserted Dr. Nick Lunn, a research scientist with Environment and Climate Change Canada. Dr. Lunn has been studying polar bear ecology and arctic marine ecosystems for more than 30 years and he made the comment during an educational presentation for visitors on a learning vacation at the centre.

What is a Learning Vacation?

A typical learning vacation at the centre lasts a week and includes tundra buggy tours, helicopter tours, an opportunity to participate in some citizen science, fascinating scientific presentations and time to explore Churchill. The food is very good at the centre and there are plenty of opportunities to see wildlife. Guests sleep in the same dorm-style rooms that scientists and researchers use. I took at least a thousand pictures during my week at CNSC. Here are some of my favorites. 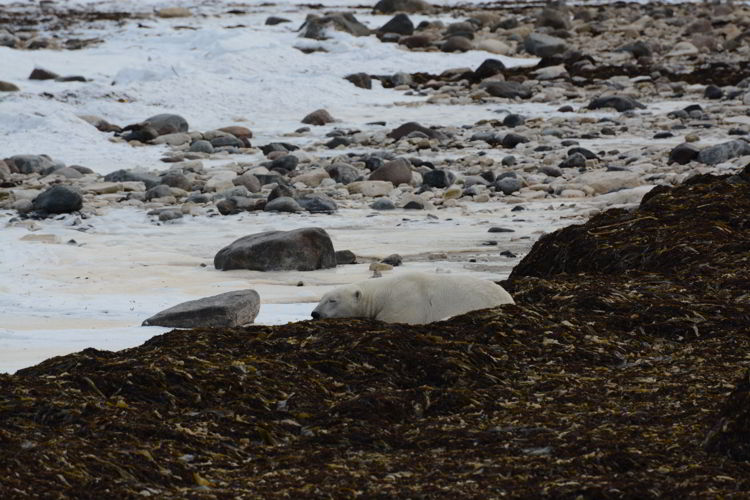 When polar bears aren’t out on the ice hunting, they try to conserve energy. It’s a long hungry summer for a polar bear. Photo by DEBBIE OLSEN 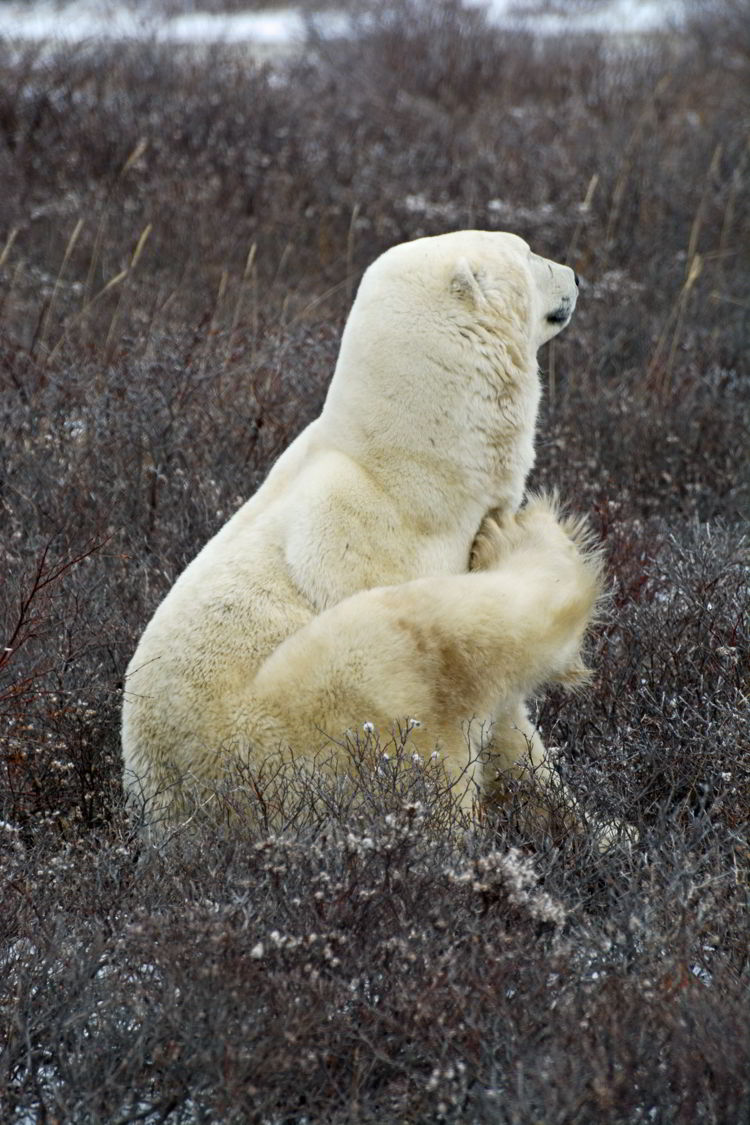 One of the ways you can tell this is a male polar bear is by the long hair on his foreleg. Males are also significantly larger than females. Photo by DEBBIE OLSEN 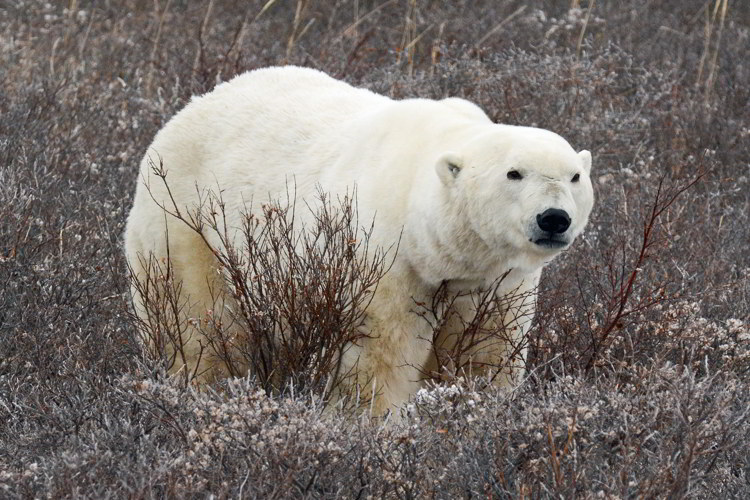 Don’t let this innocent face fool you. A hungry polar bear would eat a human if he got the opportunity. Photo by DEBBIE OLSEN 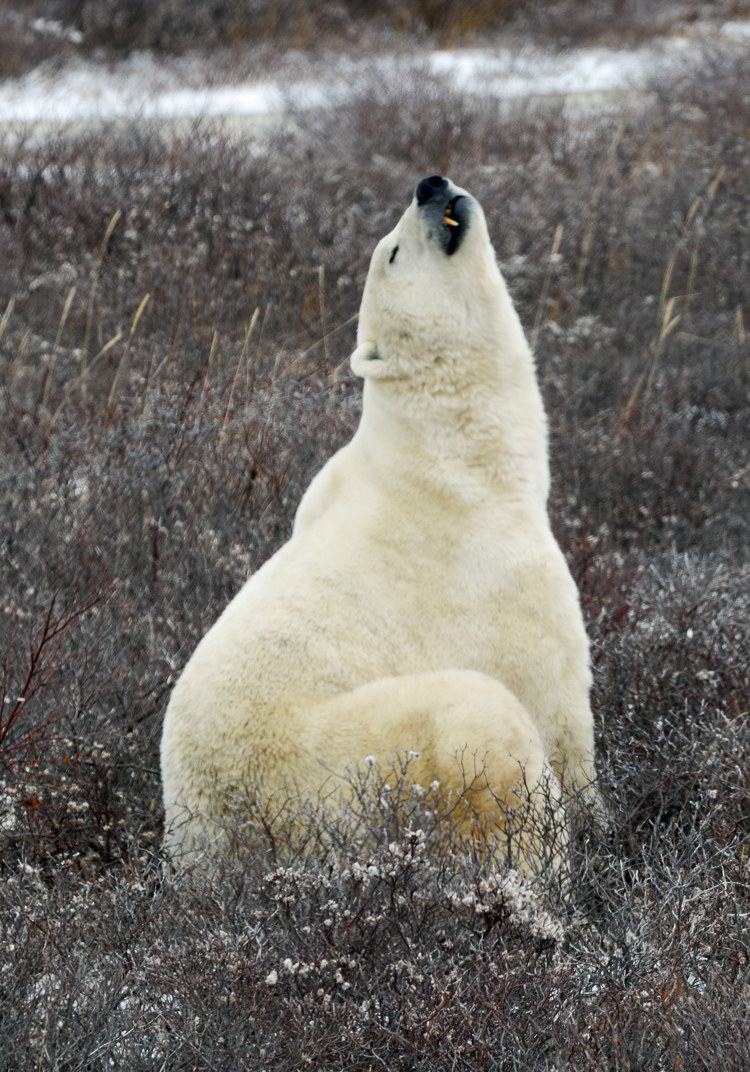 This polar bear was doing yoga stretches after his afternoon nap. Photo by DEBBIE OLSEN

I found the foxes almost as fascinating as the polar bears. Some studies have shown that Arctic fox numbers have been declining in colder climates throughout the world – including Churchill. This may be due to the warming climate, which has allowed red foxes to expand their territory northward. 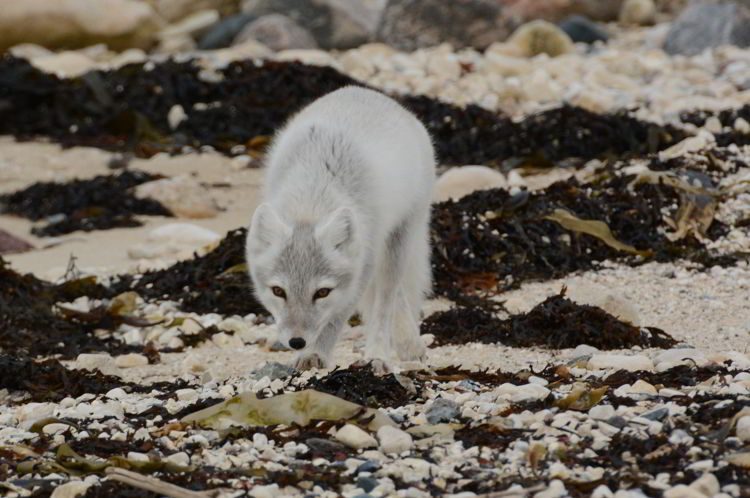 The Arctic fox is not much larger than a domestic cat, but their thick, insulating fur and increased blood circulation allow them to thrive in very cold conditions. Photo by DEBBIE OLSEN 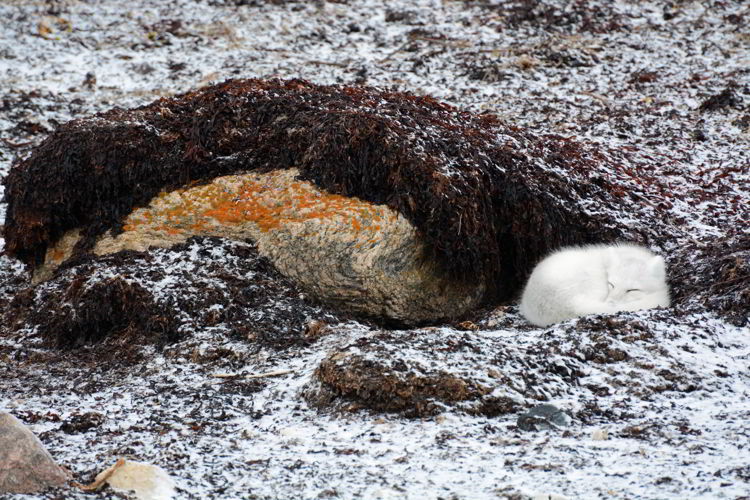 In the Arctic, animals conserve energy. This little Arctic fox was napping near its burrow as a storm rolled in. Photo by DEBBIE OLSEN 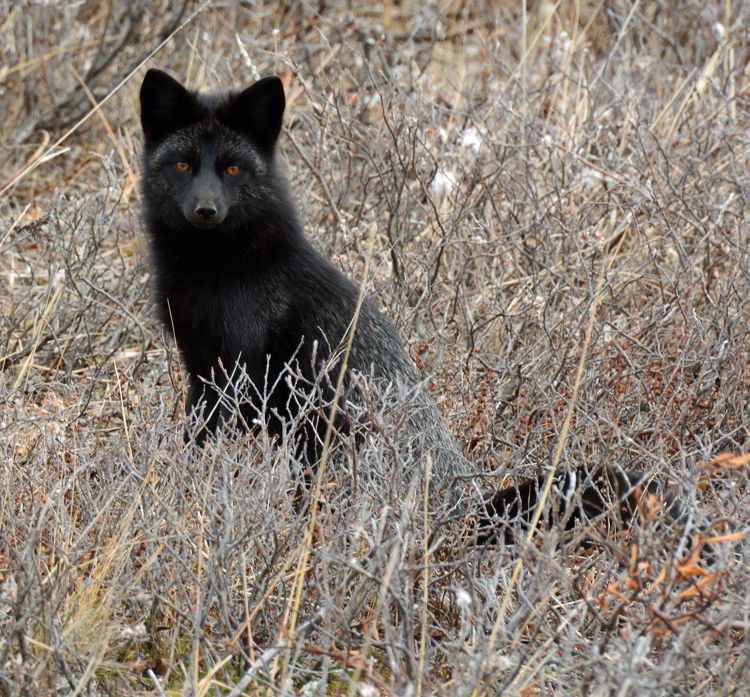 Despite the name, the red fox doesn’t always have red fur. There are several color variations and this black fox is a melanistic variety of red fox. Photo by DEBBIE OLSEN 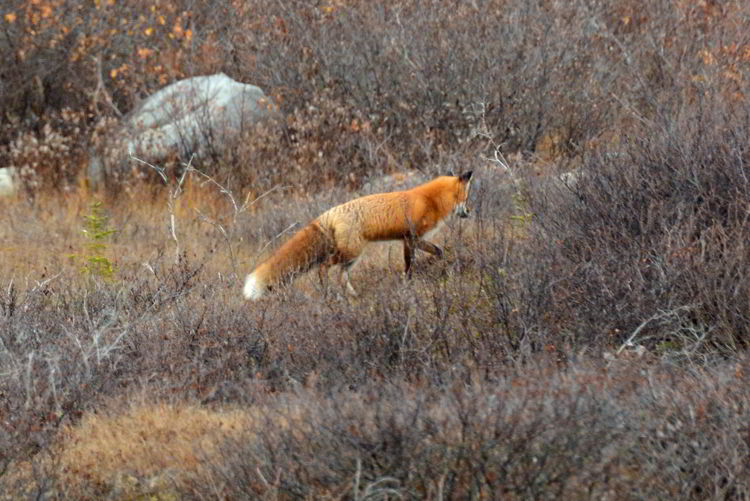 Red foxes are larger and more aggressive than their Arctic cousins. Some scientists believe that red foxes pose a direct threat to Arctic foxes. Photo by DEBBIE OLSEN 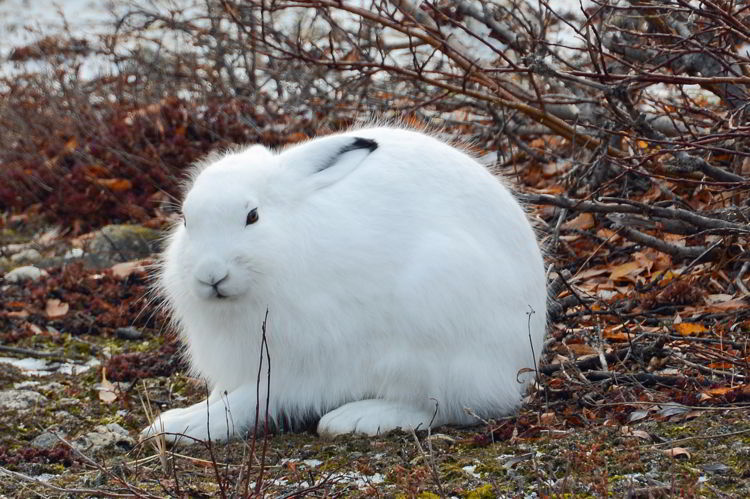 Arctic hares do not hibernate in winter. They are specially adapted to live north of the treeline and feed on leaves, roots, bark and willow. Photo by DEBBIE OLSEN 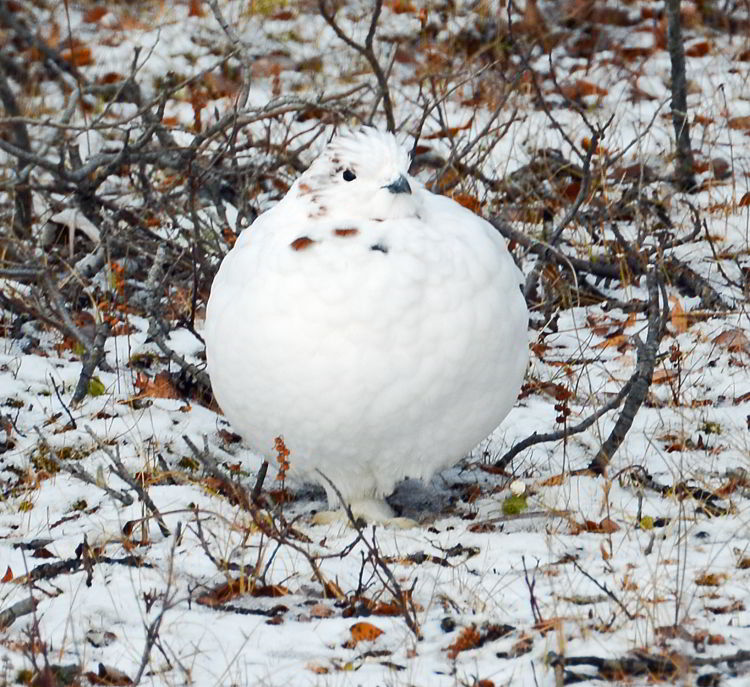 The willow ptarmigan has thick feathers that protect its legs and hide its nostrils to keep out snow. These birds change color with the seasons, so they are always well camouflaged. Photo by DEBBIE OLSEN

Weather is unpredictable in the Canadian arctic. It’s best to dress in layers to ensure you will be warm enough. Bring a good thermal base layer that wicks away moisture. You’ll also need warm socks and boots, a light jacket, ski pants and a ski jacket and warm gloves.

A good camera with a zoom lens is invaluable if you want good photos of polar bears and other Arctic species.

More Wild Adventures: If you like nature and wildlife photos and tours, check out our article about Birding in Belize.

The 1953 Marilyn Monroe film River of No Return fe

Great lunch with an amazing view at the top of Sul

Captured right in the town of Canmore. Beautiful!